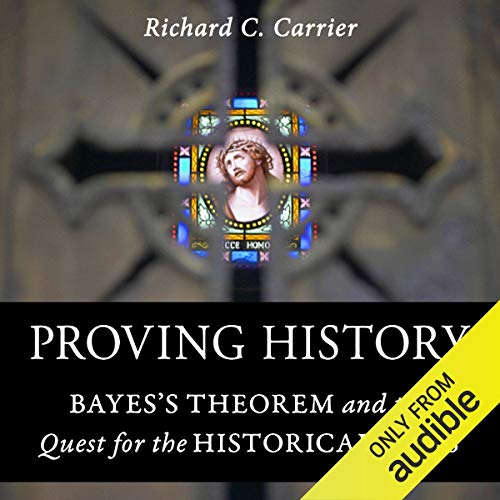 Anyone with an interest in historical methods, how historical knowledge can be justified, new applications of Bayes's Theorem, or the study of the historical Jesus will find this book to be essential reading. Almost all experts agree that the Jesus of the Bible is a composite of myth, legend, and some historical evidence. So what can we know about the real Jesus? For more than 150 years, scholars have attempted to answer this question.

Unfortunately, the quest for the historical Jesus has produced as many different images of the original Jesus as scholars who have studied the subject. The result is a confused mass of disparate opinions with no consensus view of what actually happened at the dawn of Christianity. And this uncertainty is not unique to the historical study of Jesus. The problems related to establishing the reliability of historical criteria apply equally to any historical analysis of the persons and events that have shaped our lives and the beliefs we hold dear.

This in-depth discussion of New Testament scholarship and the challenges of history as a whole proposes Bayes's Theorem, which deals with probabilities under conditions of uncertainty, as a solution to the problem of establishing reliable historical criteria. The author demonstrates that valid historical methods - not only in the study of Christian origins but in any historical study - can be described by, and reduced to, the logic of Bayes's Theorem. Conversely, he argues that any method that cannot be reduced to this theorem is invalid and should be abandoned.

Writing with thoroughness and clarity, the author explains Bayes's Theorem in terms that are easily understandable to professional historians and laypeople alike, employing nothing more than well-known primary school math. He then explores precisely how the theorem can be applied to history and addresses numerous challenges to and criticisms of its use in testing or justifying the conclusions that historians make about the important persons and events of the past. The traditional and established methods of historians are analyzed using the theorem, as well as all the major "historicity criteria" employed in the latest quest to establish the historicity of Jesus. The author demonstrates not only the deficiencies of these approaches but also ways to rehabilitate them using Bayes's Theorem.

Interesting but not quite suitable to listen to

1. Low rating for the content:
The author frequently operates with abstract symbols, formulas and abbreviations.
This is OK for a written text book, but is virtually impossible to follow when the
medium is restricted to acoustics.

Without doubt, Bayes theorem is difficult to "visualize" solely by oral means. But if someone
undertakes such an approach, I would expect a bit more than just a stream of probabilities,
prior probabilities, conditional probabilities, ...
See for instance Brian Greene, Fabric of the Cosmos, where difficult matter is elegantly
transformed into a form that is simply a pleasure to listen to.

I also don't think it is wise to introduce and refer to symbols in an audio book.
In my opinion symbols, abbreviations, unless in common use, should be avoided in oral presentations altogether (even if symbols are used on the visual aids). For an audio book referring to symbols is simply not appropriate.

The author sometimes just cites the Bible, e.g. "Mark 1 2:3, Luke 4 5:6, ...". Personally, I feel quite proud that I managed to work myself through a good deal of the Bible. It was a really tedious business, but having done that I am far of having memorized it. Again this is not appropriate for an audio book.

So, I guess, in order to turn the content into a sound audio book some modifications of the original are required.

2. Low rating for the speaker:
The oral presentation is a plain lecture. During the earlier chapters there comes a feeling that the lecturer presents his stuff to an audience that is "bound to listen". When approaching about the half of the book this feeling gave way to the perception "now even this audience is gone" and the lecturer is "lecturing to himself". I can imagine that it is difficult to just sit in front of a microphone, alone in a darkened room, ...
Still, in order to induce a pleasant experience in an audience that is limited to just hearing without any visual aid, the speaker needs to be aware of that at every instant.
The pitty is that most certainly the speaker has the capability. But unfortunately he drifts into a hasty "I need to get my message across" where a narrative approach with an attitude "I have the pleasure to share some of my time with my audience" is needed.

3. Lower rating for total:
After listening to a couple of Bart Ehrmans books (narrated by Walter Dixon, Jason Gulp, L.J. Ganzer) I was really looking forward to this audio book, but it was simply disappointing. So for anyone who is interested in the matter: you will need a written copy.