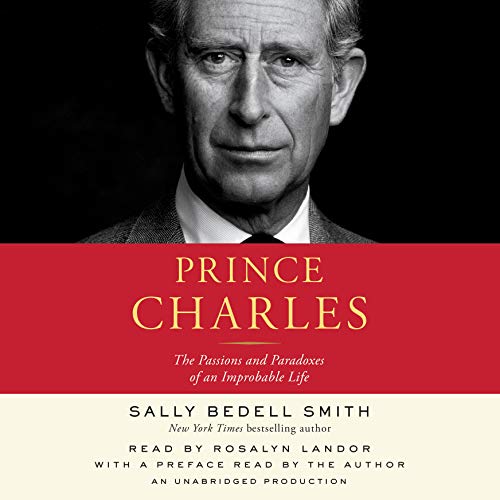 From the New York Times best-selling author of Elizabeth the Queen comes the first major biography of Prince Charles in more than 20 years - perfect for fans of The Crown.

Sally Bedell Smith returns once again to the British royal family to give us a new look at Prince Charles, the oldest heir to the throne in more than 300 years. This vivid, eye-opening biography - the product of four years of research and hundreds of interviews with palace officials, former girlfriends, spiritual gurus, and more, some speaking on the record for the first time - is the first authoritative treatment of Charles' life that sheds light on the death of Diana, his marriage to Camilla, and his preparations to take the throne one day.

Prince Charles brings to life the real man, with all of his ambitions, insecurities, and convictions. It begins with his lonely childhood, in which he struggled to live up to his father's expectations and sought companionship from the Queen Mother and his great-uncle Lord Mountbatten. It follows him through difficult years at school, his early love affairs, his intellectual quests, his entrepreneurial pursuits, and his intense search for spiritual meaning. It tells of the tragedy of his marriage to Diana; his eventual reunion with his true love, Camilla; and his relationships with William, Kate, Harry, and his grandchildren.

Ranging from his glamorous palaces to his country homes, from his globe-trotting travels to his local initiatives, Smith shows how Prince Charles possesses a fiercely independent spirit and yet has spent more than six decades waiting for his destined role, living a life dictated by protocols he often struggles to obey. With keen insight and the discovery of unexpected new details, Smith lays bare the contradictions of a man who is more complicated, tragic, and compelling than we knew - until now.

With a preface read by the author.

"Prince Charles is an 18th-century gentleman with a 21st-century mission. His love of tradition combines with an outlook that can be bracingly avant garde. Sally Bedell Smith captures his contradictions and his convictions in this fascinating book that is not just about a man who would be king, but also about the duties that come with privilege." (Walter Isaacson)
"For all we know about Prince Charles, there is so much we didn't know - until now. Sally Bedell Smith has given us a complete and compelling portrait of the man in the shadow of the throne. It's all here, from the back stairs of the palaces to the front pages of the tabs. Read all about it!" (Tom Brokaw)
"No one writes about life at the top with more panache than Sally Bedell Smith. Her Prince Charles is a delicious blend of glamour and grandeur, jealousy and rivalry, greatness and human foible. Smith writes with wisdom and sympathy - and a sharp and knowing eye - about the struggles and maturation of the man who would-be king." (Evan Thomas)