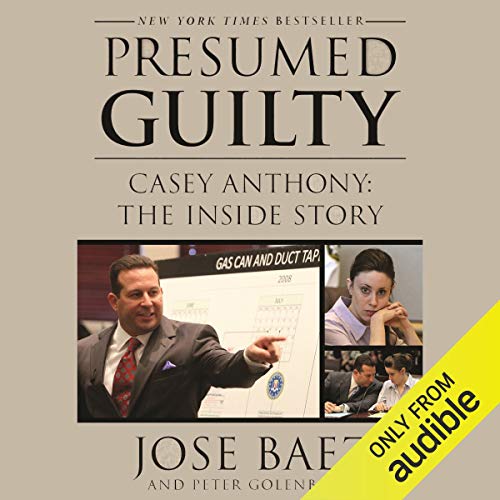 Presumed Guilty exposes shocking, never-before-revealed, exclusive information from the trial of the century and the verdict that shocked the nation.

When Caylee Anthony was reported missing in Orlando, Florida, in July 2008, the public spent the next three years following the investigation and the eventual trial of her mother, Casey Anthony. On July 5, 2011, the case that captured headlines worldwide exploded when, against all odds, defense attorney Jose Baez delivered one of the biggest legal upsets in American history: a not-guilty verdict.

In this tell-all, Baez shares secrets the defense knew but has not disclosed to anyone until now, and frankly reveals his experiences throughout the entire case - discovering the evidence, meeting Casey Anthony for the first time, being with George and Cindy Anthony day after day, leading defense strategy meetings, and spending weeks in the judge’s chambers.

Presumed Guilty shows how Baez, a struggling, high school dropout, became one of the nation’s most high-profile defense attorneys through his tireless efforts to seek justice for one of the country’s most vilified murder suspects.