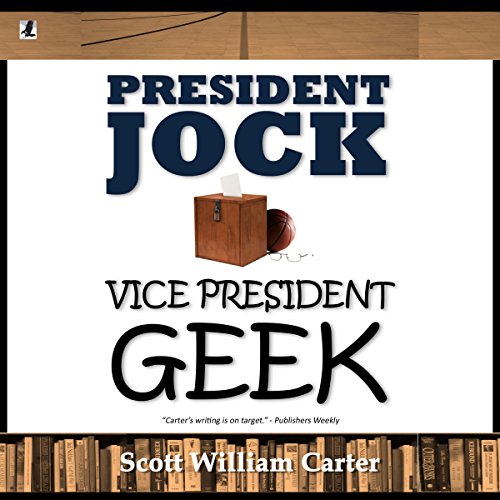 It was a simple plan. She would help him pass algebra. He would help her win the student election. What could go wrong?

Take one geeky 16-year-old girl deathly afraid of speaking to any crowd larger than one, but who desperately needs something on her application other than perfect grades to get her into Stanford. Add in a star basketball player who's Mr. Popular to everyone else, but who's hiding more than a few startling secrets. Throw in a crisis of identity, a scheming girlfriend, and troubled family lives. Oh, and make sure everything that can go wrong does. Then count the votes.

The result is President Jock, Vice President Geek, the story of two mixed up teenagers struggling to find themselves and the craziest student election ever to hit the halls of Rexton High.

Scott William Carter's first novel, The Last Great Getaway of the Water Balloon Boys, was hailed by Publishers Weekly as a "touching and impressive debut" and won the prestigious 2011 Oregon Book Award for Young Adult Literature. His fantasy from Simon and Schuster, Wooden Bones, is due out in the summer of 2012. His short stories have appeared in Asimov's, Analog, Ellery Queen, Realms of Fantasy, Weird Tales and other popular magazines and anthologies. Find out more about his books for young readers at rymadoon.com.