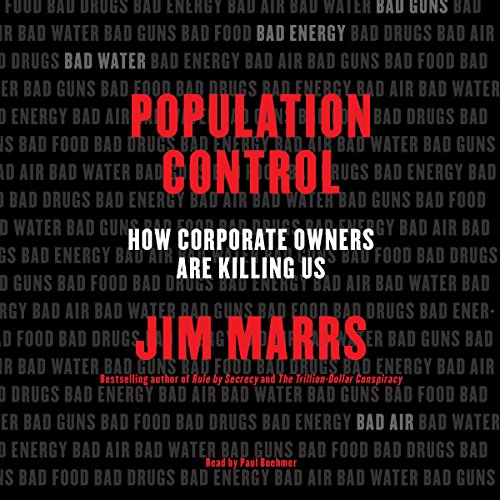 According to the Declaration of Independence, "all men are endowed by their Creator with certain unalienable Rights, that among these are Life, Liberty, and the pursuit of Happiness". But America today has failed to live up to the Founding Fathers' ideals.

Today there are three million homeless people in the US and almost 20 million vacant homes. The most technologically advanced nation in the world has a life expectancy lower than that of Chile and Bahrain. And citizens of the wealthiest country on the planet continue to ingest toxic chemicals through their food, their vaccines, and even their water. America, Jim Marrs argues, has been seized by a culture of death. And who promulgates this culture? The globalist masters of the G.O.D. syndicate - guns, oil, and drugs. Pushed to the brink by this lethal triumvirate, Americans increasingly find themselves headed toward an inexorable decline ending in servitude and premature death.

In Population Control, Marrs takes aim at our deteriorating nation and offers practical steps we can take to save it. As he exposes how daily living - from the food we eat to the water we drink to the drugs we ingest - pushes us closer to an early grave, he shows us how a return to true prosperity is possible and explains what we need to do to fight back and save our lives and our nation's soul.