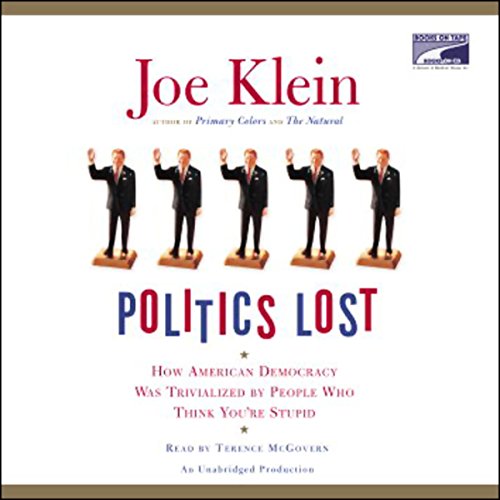 People on the right are furious. People on the left are livid. And the center isn't holding. There is only one thing on which almost everyone agrees: there is something very wrong in Washington. The country is being run by pollsters. Few politicians are able to win the voters' trust. Blame abounds and personal responsibility is nowhere to be found. There is a cynicism in Washington that appalls those in every state, red or blue. The question is: Why? The more urgent question is: What can be done about it?

Few people are more qualified to deal with both questions than Joe Klein.

He has spent a lifetime enmeshed in politics, studying its nuances, its quirks, and its decline. He is as angry and fed up as the rest of us, so he has decided to do something about it; in these pages he vents, reconstructs, deconstructs, and reveals how and why our leaders are less interested in leading than they are in the "permanent campaign" that political life has become.

In the fascinating conclusion, the author give thoughtful solutions that just may get us out of this mess, especially if any of the 2008 candidates happen to be paying attention.

"This is a passionate, often hysterical, but ultimately sad look at modern American politics." ( Booklist)