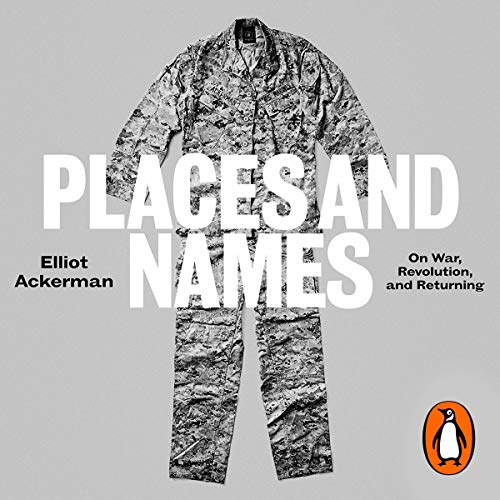 Penguin presents the audiobook edition of Places and Names: On War, Revolution and Returning, by Elliot Ackerman.

In a refugee camp in southern Turkey, Elliot Ackerman sits across the table from Abu Hassar, who fought for Al Qaeda in Iraq and has murky connections to the Islamic State. At first, Ackerman pretends to have been a journalist during the Iraq War, but after he establishes a rapport with Abu Hassar, he reveals that in fact he was a marine.

The two men then compare their fighting experiences in the Middle East, discovering they had shadowed each other for some time: a realisation that brings them to a strange kind of intimacy. Elliot Ackerman's extraordinary memoir explores the events that led him to come to this refugee camp and what, unable to forget his time in battle, he hoped to find there.

Moving between his recent time on the ground as a journalist in Syria and his marine deployments in Iraq and Afghanistan, he creates a work of astonishing atmospheric pressure, one which blends the American experience with the perspectives and stories of the Arab world and draws a line between them.

At once an intensely personal book about the terrible lure of combat and a brilliant meditation on the meaning of the past two decades of strife for the region and the world, Places and Names bids to take its place among our greatest books about modern war.