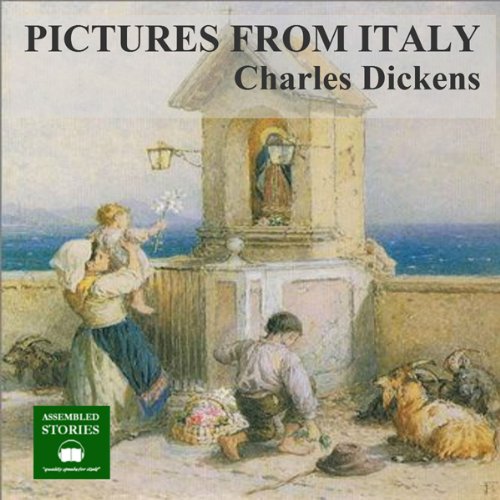 In 1843 the material that Dickins had gathered on his trip to America was published with the title American Notes [also produced by Assembled Stories]. The book was viewed with disdain from both sides of the Atlantic and in some quarters, strong disapproval, his criticism having done little for Anglo-American relations. It was no coincidence then, perhaps, that Dickens and his wife, sister in law, five children and assorted servants left England for Italy soon after, in June 1844, for an extensive tour. The plan was to use Genoa as the base for excursions to some of the sights and monuments of the country.In one year the author saw most of Northern Italy and made frequent forays down to Rome and Florence. The family finally left the country via Naples after a terrifying and dangerous visit to the crater of Vesuvius.

Dickens was as strongly opinionated as ever but, nevertheless, kept the promise he made in the Preface and refused to mention politics - though he is not reticent about condemning the poverty. It was more difficult to stop his pen when it came to religious matters. Although he apologised in case of any misunderstanding his comments regarding the excesses of piety and profit, there can be no misunderstanding what he thought - particularly in one episode in Rome involving a ‘holy staircase’Anyone familiar with his fiction will recognise the atmospheric and beguiling descriptions of this fascinating country, rich in art, character and scenery. This ‘alternative’ travel guide must have been an excellent substitute for those not wealthy enough to make the tour themselves.