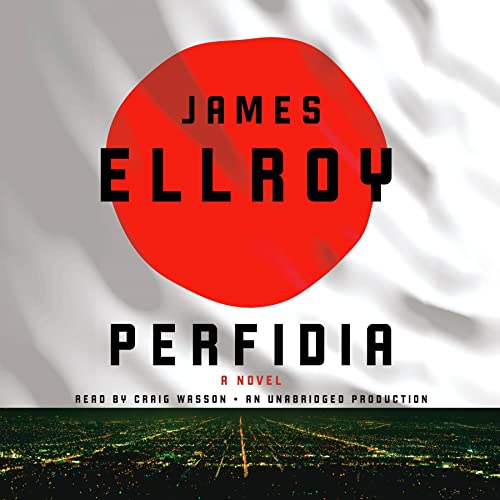 It is December 6, 1941. America stands at the brink of World War II. Last hopes for peace are shattered when Japanese squadrons bomb Pearl Harbor. Los Angeles has been a haven for loyal Japanese-Americans - but now, war fever and race hate grip the city and the Japanese internment begins.

The hellish murder of a Japanese family summons three men and one woman. William H. Parker is a captain on the Los Angeles Police Department. He's superbly gifted, corrosively ambitious, liquored-up, and consumed by dubious ideology. He is bitterly at odds with Sergeant Dudley Smith - Irish émigré, ex-IRA killer, fledgling war profiteer. Hideo Ashida is a police chemist and the only Japanese on the L.A. cop payroll. Kay Lake is a 21-year-old dilettante looking for adventure. The investigation throws them together and rips them apart. The crime becomes a political storm center that brilliantly illuminates these four driven souls - comrades, rivals, lovers, history's pawns.

Perfidia is a novel of astonishments. It is World War II as you have never seen it, and Los Angeles as James Ellroy has never written it before. Here, he gives us the party at the edge of the abyss and the precipice of America's ascendance. Perfidia is that moment, spellbindingly captured. It beckons us to solve a great crime that, in its turn, explicates the crime of war itself. It is a great American novel.

" Perfidia is a brilliant, breakneck ride. Nobody except James Ellroy could pull this off. He doesn't merely write - he ignites and demolishes." (Carl Hiaasen)
"A return to the scene of Ellroy's greatest success and a triumphant return to form. ... His character portrayals have never been more nuanced or - dare we say it - sympathetic. ... A disturbing, unforgettable, and inflammatory vision of how the men in charge respond to the threat of war. It's an ugly picture, but just try looking away." ( Booklist)
"A sprawling, uncompromising epic of crime and depravity." ( Publishers Weekly)