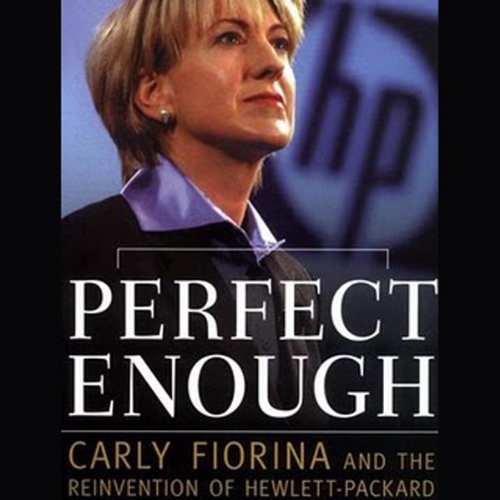 Fresh from her triumph at Lucent, Carly Fiorina took command of Hewlett-Packard in July 1999. Suddenly a woman was running one of the largest technology companies on earth, venturing farther than anyone else dared into traditional men's territory. This wasn't just the engineer's realm of bits and bytes, this was the guys' world of beer blasts, rolled-up shirt sleeves, and deer-hunting trips to the founders' ranch.

Perfect Enough is the definitive account of her daredevil bid to remake HP with a record-shattering $20 billion acquisition of archrival Compaq Computer. It is a story with unexpected heroes, courage in the face of disaster, and a struggle so fierce that it could only be settled in a courtroom showdown. Not since the late 1980s, when Wall Street operatives battled over the fate of RJR Nabisco, has a takeover drama so decisively moved beyond the business pages and become an enduring passage in American History.

Looming in the background for the entire story are the ghosts of Dave Packard and Bill Hewlett. The two men will forever be American heroes; they founded Hewlett-Packard in a Palo Alto garage during the Great Depression and built it into what was widely known as "the best outfit on earth." Some of the book's most searingly emotional scenes come when Carly Fiorina and Bill Hewlett's oldest son, Walter, fight to the point of exhaustion about which of them is truly the rightful heir to the founders' legacy.

In Perfect Enough, Anders draws on unparalleled access to Hewlett-Packard insiders and board members, including dissident Walter Hewlett, to write about a takeover battle that rocked Wall Street, stunned the computer industry, and is still being digested today. It is a spellbinding chronicle of hope, ambition, betrayal, despair, and family pride.