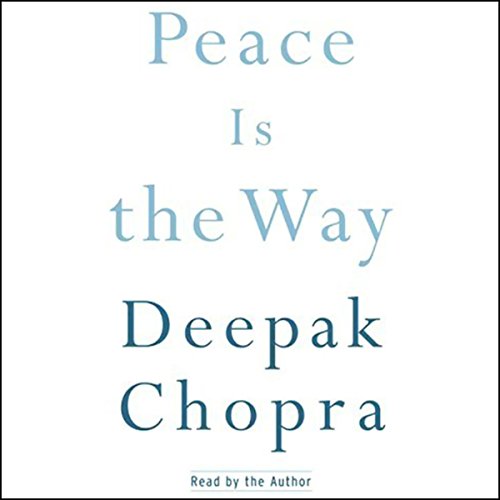 Peace Is the Way

Deepak Chopra's passionate new book, Peace Is the Way, was inspired by a saying from Mahatma Gandhi: "There is no way to peace. Peace is the way." In a world where every path to peace has proved futile, the one strategy that hasn't been tried is the way of peace itself. "We must not bring one war to an end, or 30," Chopra tells us, "but the idea of war itself."

How can this be done?

By facing the truth that war is satisfying, and then substituting new satisfactions so that violence is no longer appealing. "War has become a habit. We reach for it the way a chain smoker reaches for a cigarette, promising to quit but somehow never kicking the habit." But Chopra tells us that peace has its own power, and our task now is to direct that power and multiply it one person at a time.

Behind the numbing headlines of violence running out of control, there are unmistakable signs of a change; Chopra believes that a majority of people are ready to see an end to war. "Right now 23 million soldiers serve in armies around the world. Can't we find 10 times that number who will dedicate themselves to peace? A hundred times?"

Peace Is the Way challenges each of us to take the next leap in personal evolution. "You aren't asked to be a saint, or to give up any belief. You are only asked to stop reacting out of fear, to change your allegiance from violence to peace." In a practical seven-step program, Chopra shows the reader how to become a true peacemaker. "Violence may be innate in human nature, but so is its opposite: love. The next stage of humanity, the leap which we are poised to take, will be guided by the force of that love." This is more than a hope or an aspiration. It is a new way of being in the world, giving each individual the power to end war in our time.

"Chopra's affirmation that 'our true identity is at the level of spirit and nowhere else' has the ring of truth and so does the rest of this simple, practical, inspiring book." ( Publishers Weekly)