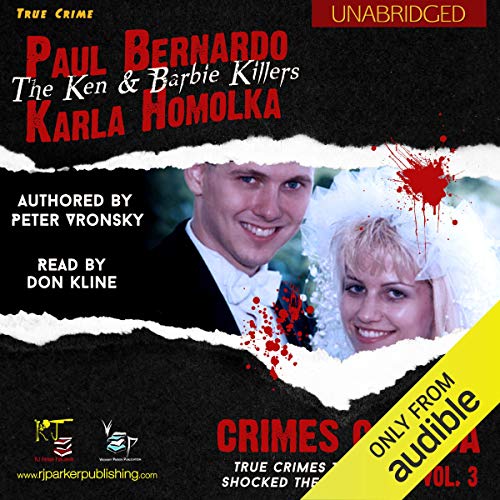 Paul Bernardo and Karla Homolka: The True Story of the Ken and Barbie Killers

Warning: This audiobook contains police and court transcripts and descriptions of graphic sexual violence contained in videotapes made by the perpetrators.

Paul Bernado and Karla Homolka were so perfectly iconic as a newlywed couple that they were dubbed "Ken and Barbie". But their marriage had a dark side involving sex, death, and videotape. The "perfect couple" first raped and murdered Karla's little sister then kidnapped teenage schoolgirls whom they enslaved, raped, tortured, and killed while gleefully recording themselves on video doing it.

Vronsky will take you on the journey from the Scarborough Rapist (Bernardo) to Bordelais (Homolka's current last name) and her return to Canada in October 2014 from the island of Guadeloupe, where she lived for several years.

This is the third audiobook in the Crimes Canada: True Crimes That Shocked the Nation collection.