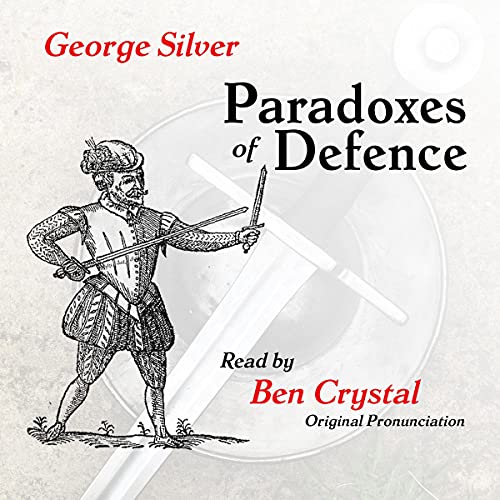 Paradoxes of Defence was first published in London in 1599. It was written by George Silver, an English gentleman, who was appalled at the influx of Italian rapier fencing into England, and set out his arguments in favor of the traditional English weapons: the short sword, the short staff, the forrest bill, the morris pike, and all manner of additional arms such as daggers, bucklers, and targes. He rails against the fashionable new style on the grounds that it is both dangerous to the practitioners, and of no use in warfare.

Whether he was right or wrong, history was against him and the fashionable Italian rapier took over. But his work offers a vital window into the theory and practice of martial arts in England in Tudor times, and ironically provides much of what we know about several Italian rapier masters: Rocco Bonetti, Vincentio Saviolo, and Jeronimo Saviolo.

In this edition, the text has narrated by Ben Crystal in original pronunciation. The original text includes marginalia, which have been incorporated into the audio files.

We have also produced a version that has been modernized and edited by Guy Windsor, and narrated in modern pronunciation by Jonathan Hartman.