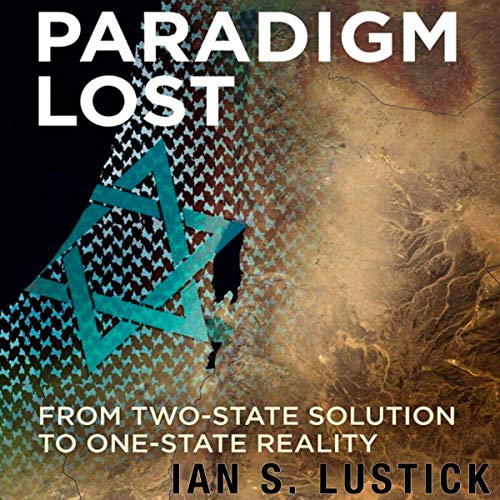 Why have Israelis and Palestinians failed to achieve a two-state solution to the conflict that has cost so much and lasted so long? In Paradigm Lost, Ian S. Lustick brings 50 years as an analyst of the Arab-Israeli dispute to bear on this question and offers a provocative explanation of why continued attempts to divide the land will have no more success than would negotiations to establish a one-state solution.

Basing his argument on the decisiveness of unanticipated consequences, Lustick shows how the combination of Zionism's partially successful Iron Wall strategy for dealing with Arabs, an Israeli political culture saturated with what the author calls "Holocaustia", and the Israel lobby's dominant influence on American policy toward the Arab-Israeli conflict scuttled efforts to establish a Palestinian state alongside Israel. Yet, he demonstrates, it has also unintentionally set the stage for new struggles and "better problems" for both Israel and the Palestinians. Lustick encourages shifting attention from two-state blueprints that provide no map for realistic action to the democratizing competition that arises when different subgroups, forced to be part of the same polity, redefine their interests and form new alliances to pursue them.

"A richly informed and persuasive account of how the relationship between Israelis and Palestinians has become the seemingly dead-end tragedy it is today. (Paul R. Pillar, former National Intelligence Officer for the Near East and South Asia)

"A must-read for all who are interested in, and care about, Israel and the Israeli-Palestinian conflict." (Mark Tessler, University of Michigan)

"A must-read for every Israeli and American interested in going beyond the present impasse." (Leila Farsakh, University of Massachusetts)