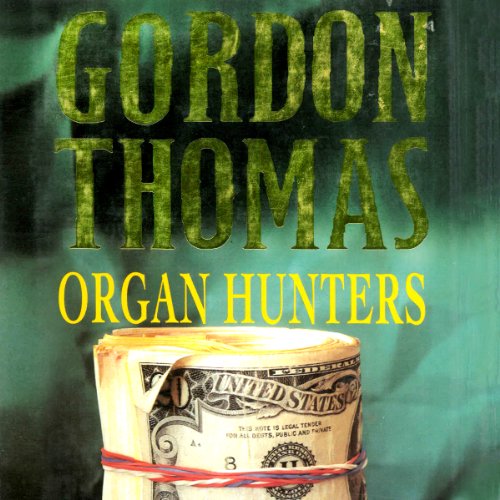 All over the world people are turning up dead, their vital organs excised with terrifying precision. One extremely evil woman is to blame for these ghastly murders, and David Morton of the United Nations police force must stop her and the international conglomerate she has created. Author Gordon Thomas has created a taught, terrifying thriller expertly performed by Gary Dikeos, whose gravelly voice heightens the intrigue. Recommended for those who like their thrillers with a Le Carré flavor, and plenty of gore.

On a remote island in Central America, David Morton must foil Dr. Gustav Romer, who performs transplants for the elite of the crime world with organs harvested from those killed by a sinister organization.

On a remote island in Central America, Dr. Gustav Romer - once the medical supreme of the now defunct Stasi, the East German security service, and the world’s leading immunologist until his reported death - has secretly built a clinic like no other. His patients are the elite of the crime world - Mafia bosses, Triad leaders, the new czars of the Russian criminal fraternity, the lords of the Japanese underworld.

For them, he provides organ transplants. The organs come from the bodies of those killed for that very purpose by the sinister organization which employs Romer and his staff. They owe allegiance to one person, the person known as Madam.

Rich beyond comparison, her wealth is equaled only by her evil. But to a still unsuspecting world she is best known for her charitable acts. And for her hatred of the other woman in her dead lover’s life - his wife. Theirs is an unremitting feud which straddles the globe. Once a year fate brings them together - at the Nobel Prize ceremonies in Stockholm.

This year, David Morton of Hammer Force, the police agency created by the United Nations, has a personal interest in the Awards - his long-time friend and collaborator, Dr. Yoshi Kramer, is to receive the Prize for Medicine. Only Morton knows that Yoshi himself has a heart condition and needs urgent surgery.…

Gordon Thomas has created a stunningly original plot to succeed his previous David Morton adventures - Deadly Perfume, Godless Icon, and Voices in the Silence. Combining the author’s matchless knowledge of the latest medical technology with that of the secret intelligence world, Organ Hunters is a compelling story of life - from death.

"Compulsively readable and scary, scary, scary." (France Soir, Paris)
"The author is a global expert on the world of secret intelligence." (Los Angeles Times)
"Morton is a character who could have been created by Fortsythe, Le Carre, or Ludlum. You will read any of his adventures in one sitting. Whichever one you choose." (Le Monde, France)