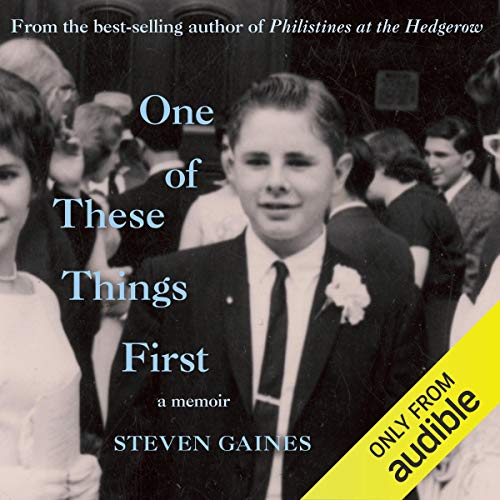 One of These Things First

One of These Things First

From New York Times best-selling author Steven Gaines comes a wry and touching memoir of his trials as a gay teen at the famed Payne Whitney Psychiatric Clinic.

One of These Things First is a poignant reminiscence of a 15-year-old gay Jewish boy's unexpected trajectory from a life behind a rack of dresses in his grandmother's Brooklyn bra-and-girdle store to Manhattan's infamous Payne Whitney Psychiatric Clinic, whose alumni includes writers, poets, and madmen as well as Marilyn Monroe and best-selling author Steven Gaines.

With a gimlet eye and a true gift for storytelling, Gaines captures his childhood shtetl in Brooklyn, and all its drama and secrets, like an Edward Hopper tableau: his philandering grandfather with his fleet of Cadillacs and Corvettes; a giant, empty movie theater, his portal to the outside world; a shirtless teenage boy pushing a lawnmower; and a pair of tormenting bullies whose taunts drive Gaines to a suicide attempt.

Gaines also takes the listener behind the walls of Payne Whitney - the "Harvard of psychiatric clinics", as Time magazine called it - populated by a captivating group of neurasthenics who affect his life in unexpected ways. The cast of characters includes a famous Broadway producer who becomes his unlikely mentor; an elegant woman who claims to be the ex-mistress of newly elected president John F. Kennedy; a snooty, suicidal architect; and a seductive young contessa. At the center of the story is a brilliant young psychiatrist who promises to cure a young boy of his homosexuality and give him the normalcy he so longs for.

For listeners who love stories of self-transformation, One of These Things First is a fascinating memoir in the vein of Susanna Kaysen's Girl, Interrupted and Augusten Burroughs' Running with Scissors. With its novelistic texture and unflagging narrative, this book is destined to become one of the great indelible works of the memoir genre.

Das sagen andere Hörer zu One of These Things First