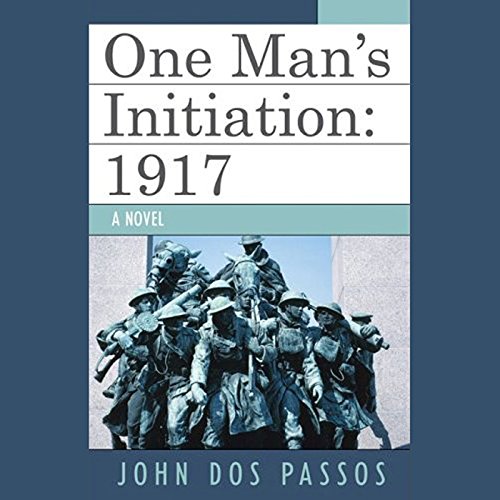 Much like the fictional protagonist of One Man's Initiation: 1917, John Dos Passos volunteered after college as an ambulance driver in France during World War I. This novella - Dos Passos' first published work - reshapes those autobiographical experiences into a stirring portrayal of the horrors of war.

Jeff Woodman, an AudioFile Best Voice winner, performs every aspect of the audiobook with appropriate energy, whether he's singing patriotic songs like a guileless soldier or voicing the diversely accented young men who encounter dehumanizing destruction for the first time and wind up disillusioned, or, like Dos Passos himself did, politicized. The discontinuous literary style reflects the innate disorder of war.

Springing from the author's first-hand experience as an ambulance driver and Red Cross worker during World War I, this autobiographical first novel is noteworthy for its vivid and colorful evocation of France at that time and for its passionate indictment of war.

The author's disillusionment with war for a time turned him toward socialism and against capitalism. Ultimately, after being labeled "pro-German" and "pacifist", the author concluded that the quasi-religion of Marxism turned loose more brutal aggression than "poor old Capitalism ever dreamed of".