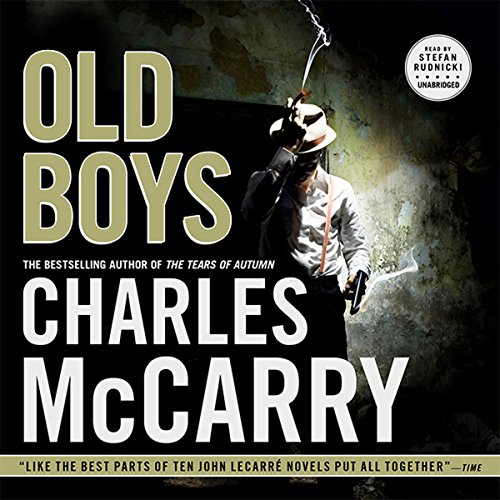 Charles McCarry is considered by many to be the master of world-class spy fiction, garnering praise from peers and critics alike for his riveting novels. Christopher Buckley wrote that McCarry “is not only one of the best writers in America but one of the most important. He dazzles, from epigraph to epilogue,” and the Los Angeles Times hailed his work as “first rate, in the tradition of the best espionage fiction, John Buchan to Eric Ambler and John le Carré.”

In this magnificent novel, Charles McCarry returns to the world of his legendary character Paul Christopher—the savvy intelligence agent as skilled at choosing a fine wine as he is at tradecraft, at once sophisticated and dangerous, and no stranger to the world of dirty tricks.

Now Paul Christopher has mysteriously disappeared. Months pass and a memorial service is held for him in Washington. But a group of his retired colleagues - the “Old Boys” from the Outfit - refuse to believe Christopher is dead. Led by Christopher’s cousin Horace, the Old Boys embark on a thrilling worldwide search for the master spy and an ancient scroll that may reveal an unspeakably dangerous truth.

Charles McCarry is the author of 10 critically acclaimed novels and nine nonfiction books. He is a former editor at large of National Geographic and has contributed dozens of articles, short stories, and poems to leading national magazines. His op-ed pieces and other essays have appeared in the New York Times, Wall Street Journal, and Washington Post. For 10 years he served under deep cover as a CIA operations officer.

“ Old Boys is like the best parts of ten John le Carré novels all put together.” ( Time)
“ Old Boys is, at heart, a lament for a dying generation of American spies, an elegy for the human twilight, Cocoon with a cloak and dagger.” ( Washington Post)
“McCarry's latest is an old-fashioned, rollicking adventure that beats Ludlum and Cussler at their own game…Tremendous fun.” ( Booklist)