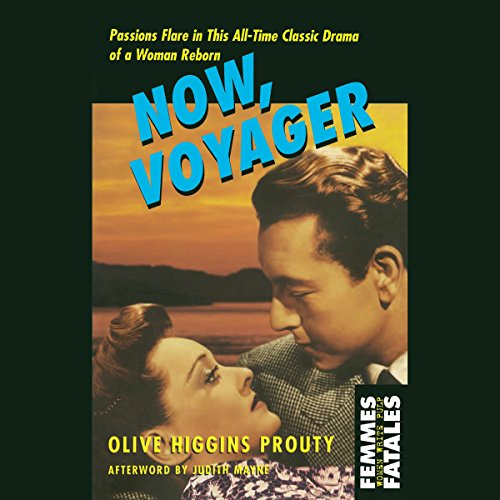 "Don’t let’s ask for the moon! We have the stars!” The film that concludes with Bette Davis’s famous word reaffirmed Davis’s own stardom and changed the way Americans smoked cigarettes. But few contemporary fans of this story of a woman’s self-realization know its source. Olive Higgins Prouty’s 1941 novel Now, Voyager provides an even richer, deeper portrait of the inner life of its protagonist and the society she inhabits. Viewed from a distance of more than 60 years, it also offers fresh and quietly radical takes on psychiatric treatment, traditional family life, female desire, and women’s agency.

Boston blueblood Charlotte Vale has led an unhappy, sheltered life. Lonely, dowdy, repressed, and pushing 40, Charlotte finds salvation at a sanitarium, where she undergoes an emotional and physical transformation. After her extreme makeover, the new Charlotte tests her mettle by embarking on a cruise and finds herself in a torrid love affair with a married man which ends at the conclusion of the voyage. But only then can the real journey begin, as Charlotte is forced to navigate a new life for herself. While Now, Voyager is a tear-jerking romance, it is at the same time the empowering story of a woman who finds the strength to chart her own course in life; who discovers love, sex, and even motherhood outside of marriage; and who learns that men are, ultimately, dispensable in the quest for happiness and fulfillment.