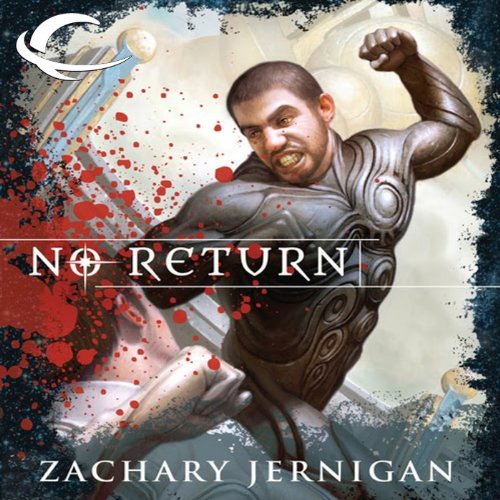 Zachary Jernigan's No Return tells the daring, complex story of a fantasy world in which the proven existence of a god seems to have done little to solve the problems that religious dissent traditionally cause. Jernigan grapples with issues of divinity, while simultaneously telling a sensual, gripping story, featuring compelling characters and admirable world building.

John FitzGibbon's grave voice suits the depth of Jernigan's subject matter well, and his performance lends equal weight to thrilling action sequences and dark existential contemplation. His delivery of the audiobook is strong and thoughtful, imbuing Jernigan's words with a truer and deeper power even than they may have had on the page.

On Jeroun, there is no question as to whether God exists - only what his intentions are.

Under the looming judgment of Adrash and his ultimate weapon - a string of spinning spheres beside the moon known as The Needle - warring factions of white and black suits prove their opposition to the orbiting god with the great fighting tournament of Danoor, on the far side of Jeroun's only inhabitable continent.

From the 13th Order of Black Suits comes Vedas, a young master of martial arts, laden with guilt over the death of one of his students. Traveling with him are Churls, a warrior woman and mercenary haunted by the ghost of her daughter, and Berun, a constructed man made of modular spheres possessed by the foul spirit of his creator. Together they must brave their own demons, as well as thieves, mages, beasts, dearth, and hardship on the perilous road to Danoor, and the bloody sectarian battle that is sure to follow.

On the other side of the world, unbeknownst to the travelers, Ebn and Pol of the Royal Outbound Mages (astronauts using Alchemical magic to achieve space flight) have formed a plan to appease Adrash and bring peace to the planet. But Ebn and Pol each have their own clandestine agendas - which may call down the wrath of the very god they hope to woo.

"This debut science fantasy is a fascinating exploration of how atheism might function in a world where everyone knows that God (or at least, a god) exists.... FitzGibbon has a deep, resonant, stately voice, suitable to the thoughtful nature of the story; it works particularly well for Berun, the constructed man (essentially a magical android) who discovers previously untapped depths of emotion and seeks to free himself from his maker. FitzGibbon also narrates scenes of vicious fighting, space voyaging, and tantric sex with verve and sizzle." (Locus)