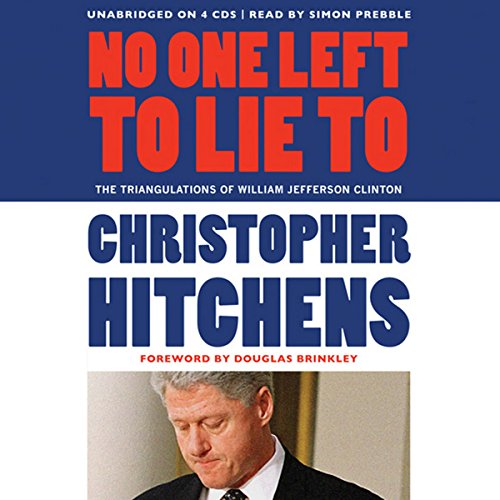 No One Left to Lie To

"Just as the necessary qualification for a good liar is a good memory, so the essential equipment of a would-be lie detector is a good timeline, and a decent archive."

In No One Left to Lie To, a New York Times best seller, Christopher Hitchens casts an unflinching eye on the Clinton political machine and offers a searing indictment of a president who sought to hold power at any cost. With blistering wit and meticulous documentation, Hitchens masterfully deconstructs Clinton's abject propensity for pandering to the Left while delivering to the Right, and he argues that the president's personal transgressions were ultimately inseparable from his political corruption.

Hitchens questions the president's refusals to deny accusations of rape by reputable women and lambasts, among numerous impostures, his insistence on playing the race card, the shortsightedness of his welfare bill, his ludicrous war on drugs, and his abandonment of homosexuals in the form of the Defense of Marriage Act.

Das sagen andere Hörer zu No One Left to Lie To