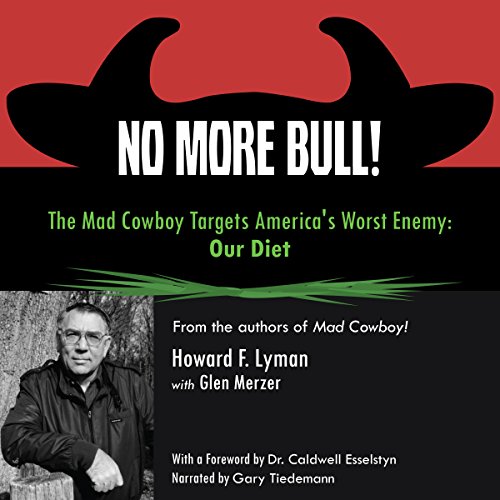 In 1996, when Howard Lyman warned America on The Oprah Winfrey Show that Mad Cow Disease was coming to America, offended cattlemen sued him and Oprah both. Not only were Lyman and Oprah vindicated in court, but events have proved many of Lyman's predictions absolutely right. Mad Cow Disease has come to America, and Lyman argues persuasively in No More Bull! that the problem will only grow more deadly until our government deals with it seriously.

Lyman, a fourth-generation Montana rancher turned vegetarian then vegan, told the story of his personal transformation after a spinal tumor, which he believes was caused by agricultural chemicals, nearly left him paralyzed. In No More Bull!, Lyman uses his humor, compassion, firsthand experience in agriculture, and command of the facts of health to argue that we might all profit by transforming our diets. He makes a powerful case that Alzheimer's is yet another disease linked to eating meat. And he explains that the steak at the heart of your dinner plate not only may destroy your own heart but actually offers no more nutritional value than a doughnut! If you've been confused by the competing claims of the Atkins Diet, the South Beach Diet, and other fad diets, No More Bull! is the book that will set you straight. Its pure, unvarnished truth is told with down-home common sense.

Lyman's got a message for meat eaters, vegetarians, and vegans - and the message is that we can all do better for ourselves and the planet.