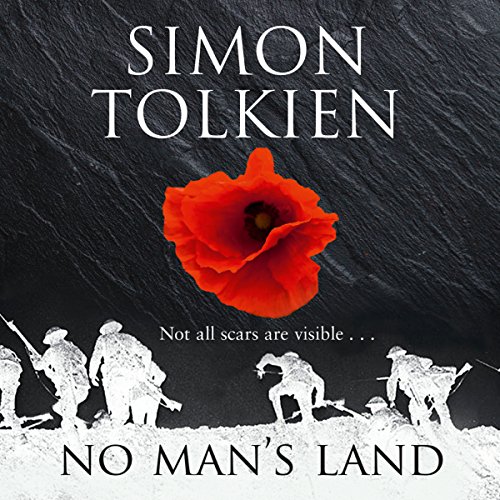 No Man's Land is Simon Tolkien's first literary novel - it's a picture of early 20th-century England torn apart by the First World War, as seen through the eyes of a working-class boy whose turbulent life is finally coming together when he is posted to the Somme in 1916.

Adam Raine was raised in the slums of Islington by his working-class mother and father. When his mother is killed in a workers' protest march, his father, unable to cope, puts him in the workhouse. He's rescued by a job offer for his father in the coal mining town of Scarsdale, but the local boys prove difficult to befriend, and he never quite fits in.

A colliery disaster changes Adam's fate again when he is adopted into the rich mine owner's family. Unfortunately the man's son, Bryce Scarsdale, refuses to accept him and subjects him to years of cruelty. In his 18th year, Adam escapes by enrolling in Oxford, but his studies are interrupted by the outbreak of war.

It isn't long before Adam is forced to leave his new fiancée, the Parson's beautiful daughter, and is sent to the battlefields of the Somme, accompanied by the boys he grew up with. Within this brotherhood Adam finally finds the family he's always longed for, but the war threatens to tear them apart.

Praise for Simon Tolkien's work: "Tolkien's writing is quietly impressive; his atmosphere of the blitzed capital superb." (The Times)
"Tolkien has upped his game." (Publishers Weekly)
"Half Christie and half Grisham." (Los Angeles Times)
"A remarkably skillful novel, brilliantly conceived and beautifully executed." (Washington Post)
"Tolkien's skill as a storyteller is worthy of notice in this taut, well-paced legal thriller." (Library Journal)
"The twists keep coming until that last witness. Highly convincing debut." (People Magazine)
"Fast-paced and with suspense to spare, [Tolkien's] debut shows admirable skill and depth and has a conclusion as surprising as it is satisfying." (Dallas Morning News)
"Tolkien's writing has a timeless quality [and] the haunting undertones of other great masters of mystery." (USA Today)
"Part English cozy, part family saga, part courtroom drama, this genre-bending work of fiction is touching and enchanting." (Booklist)