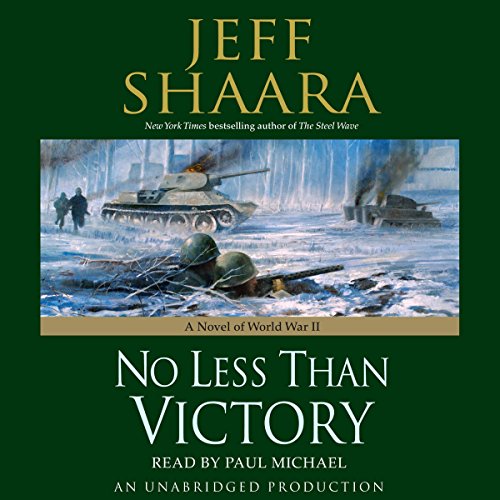 No Less Than Victory

After the success of the Normandy invasion, the Allied commanders are buoyantly confident that the war in Europe will be over in a matter of weeks, that Hitler and his battered army have no other option than surrender. But despite the advice of his best military minds, Hitler will hear no talk of defeat.

In mid-December 1944, the Germans launch a desperate and ruthless counteroffensive in the Ardennes forest, utterly surprising the unprepared Americans who stand in their way. Through the frigid snows of the mountainous terrain, German tanks and infantry struggle to realize Hitler's goal: divide the Allied armies and capture the vital port at Antwerp. The attack succeeds in opening up a wide gap in the American lines, and for days chaos reigns in the Allied command.

Thus begins the Battle of the Bulge, the last gasp by Hitler's forces that becomes a horrific slugging match, some of the most brutal fighting of the war. As American commanders respond to the stunning challenge, the German spear is finally blunted.

Though some in the Nazi inner circle continue the fight to secure Germany's postwar future, the Führer makes it clear that he is fighting to the end. He will spare nothing - not even German lives - to preserve his twisted vision of a "Thousand Year Reich". But in May 1945, the German army collapses, and with Russian troops closing in, Hitler commits suicide.

As the Americans sweep through the German countryside, they unexpectedly encounter the worst of Hitler's crimes, the concentration camps, and young GIs find themselves absorbing firsthand the horrors of the Holocaust.

Presenting his riveting account through the eyes of Eisenhower and Patton and the young GIs who struggle face-to-face with their enemy, and through the eyes of Germany's old soldier Gerd von Rundstedt and Hitler’s golden boy, Albert Speer, Jeff Shaara carries the listener on a journey that defines the spirit of the soldier and the horror of a madman’s dreams. No Less Than Victory further solidifies Shaara’s reputation as this era’s most accomplished author of historical military fiction.