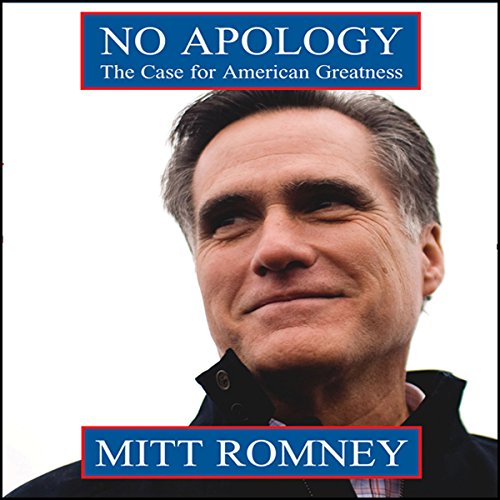 On his first presidential visit to address the European nations, President Obama felt it necessary to apologize for America’s international power. He repeated that apology when visiting Latin America, and again to Muslims worldwide in an interview broadcast on Al-Arabiya television.

In No Apology, Mitt Romney asserts that American strength is essential—not just for our own well-being, but for the world’s. Governments such as China and a newly robust Russia threaten to overtake us on many fronts, and Islam continues its dangerous rise. Drawing on history for lessons on how great powers collapse, Romney shows how and why our national advantages have eroded. From the long-term decline of our manufacturing base, our laggard educational system that has left us without enough engineers, scientists, and other skilled professionals, our corrupted financial practices that led to the current crisis, and the crushing impact of entitlements on our future obligations, America is in debt, overtaxed, and unprepared for the challenges it must face. We need renewal: fresh ideas to cut through complicated problems and restore our strength.

Most important, he calls for a new commitment to citizenship, a common cause we all share, rather than a laundry list of individual demands. Many of his solutions oppose President Obama’s policies, many also run counter to Republican thinking, but all have one strategic aim: to move America back to political and economic strength. Personal and dynamically-argued, No Apology is a call to action by a man who cares deeply about America’s history, its promise, and its future.

Interesting look inside the 2012 Candidate

In 2016 we have two bad candidates for president, but Romney was a good.
I don't agree on all points of his policy, but on the most and I can follow his way of thinking. I liked that he narrated his book himself also he isn't a professional narrator.
But I think he talked a bit to long about some points and other to little and didn't give many cures.
--> The book is interesting and good, but not a "must read"