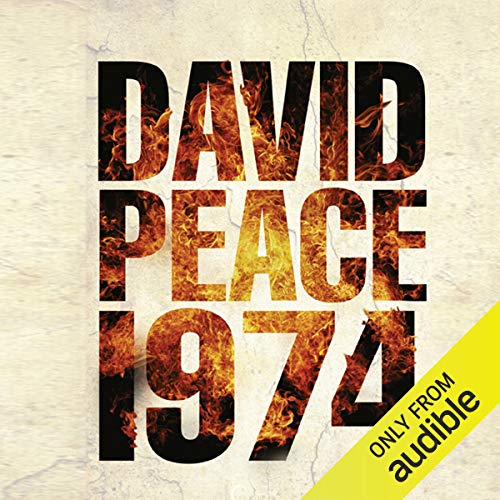 Jeanette Garland, missing Castleford, July 1969. Susan Ridyard, missing Rochdale, March 1972. Claire Kemplay, missing Morley, since yesterday. It’s winter, 1974, Yorkshire, Christmas bombs, Lord Lucan on the run, the Bay City Rollers, and Eddie Dunford’s got the job he wanted – crime correspondent for the Yorkshire Evening Post. He didn’t know it was going to be a season in hell. A dead little girl with a swan’s wings stitched into her back. A gypsy camp in a ring of fire. Corruption everywhere you look.

In Nineteen Seventy Four, David Peace brings passion and stylistic bravado to this terrifyingly intense journey into a secret history of sexual obsession and greed, and starts a highly acclaimed crime series that has redefined how the genre is approached.

David Peace (born 1967) is an English author. He was named one of the Best of Young British Novelists by Granta in 2003 and won the 2004 James Tait Black Memorial Prize for Fiction. He is also known for his novels GB84 and The Damned United; the latter was made into a feature film starring Michael Sheen.

" Nineteen Seventy Four is raw and furiously alive, the literary equivalent of a hard right to the jaw. David Peace has delivered the finest crime fiction debut of the year and joined a select group of novelists who are transforming the genre with passion and style." (George Pelecanos)
"Quite simply, this is the future of British crime fiction." ( Time Out)
"The pace is relentless, the style staccato-plus and the morality bleak and forlorn....Peace's voice is powerful and unique." ( Guardian)

My main reason for buying this audio book was its brilliant narrator Saul Reichlin. Once again, he did not disappoint, his narration skills being - at least to my opinion - unrivalled!

As to the book, after the first hour I was tempted to give it back, the "explicit" - for me just vulgar - language and the repetitive phrases didn't appeal to me and made listening somehow tiresome. But then I got used to it and - especially - got caught in the story and the plot(s), and in spite of many nearly unbearable brutal scenes couldn't put the book away until it's very end. A cliffhanger? I'll see, the sequel 1977 is downloading right now...