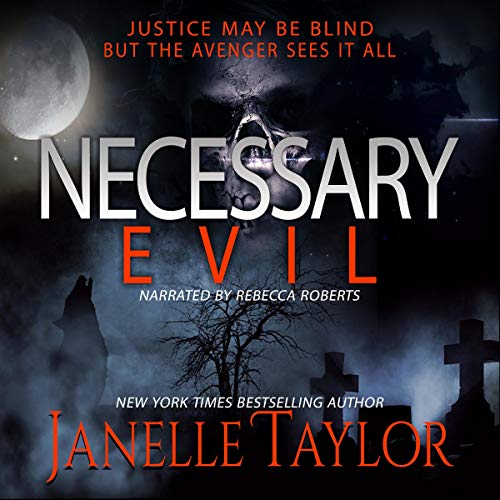 Multi-award winning, New York Times bestselling author Janelle Taylor brings you a psychological thriller that will shock and enthrall you with its intensity as she takes you into the darkest regions of revenge and retribution.

When Justice is blind and helpless, a merciless and cunning vigilante steps in and becomes a necessary evil, one willing to go to any lengths to punish the guilty. It is “a mix of police procedural, mystery, thriller, and horror.”

The public and media want to know, is there a serial killer on the prowl? Or is someone just yanking the blindfold off Lady Justice? Who is stepping in as judge, jury, and executioner when criminals escape punishment for horrendous deeds? Is a hero or a villain at work in the Garden City?

“The Bible says, ‘If men strive, and hurt a woman...he shall be punished. Thou shalt give life for life, eye for eye, tooth for tooth, hand for hand, foot for foot, burning for burning, wound for wound, stripe for stripe.’ I say, Heaven and victims raged as another beast was set free. Taking an eye for an eye was left up to me. If Justice is blind or her hands are bound, Rejoice, Good Citizens, for I am around.”

A note left behind at a grisly crime scene was signed "The Avenger".

Now, the grim stalker had a revealing name and motive, and Lt. Dan Mallory and his squad had to stop him from avenging heinous crimes against women. But the lethal predator proved to be smarter and more deadly than any killer they had ever tracked.

No clues. No forensics. Nothing- but a trail of mutilated bodies of men the courts had released on technicalities or loopholes in the legal system.

Were the male victims connected? Were they really victims or just finally paying for their past violent crimes? The list of suspects kept changing; and the list of possible prey was long.

Warning: this book with its graphic contents and language is for mature audiences only.

Gritty. Dark. Spell-binding. Sinister. Intense. Not for the faint of heart.

Necessary Evil is a book that will make your heart pound - and compel you to check the locks on your doors and windows. Also included are excerpts of forthcoming Unnecessary Evil and Dangerous Deceptions.