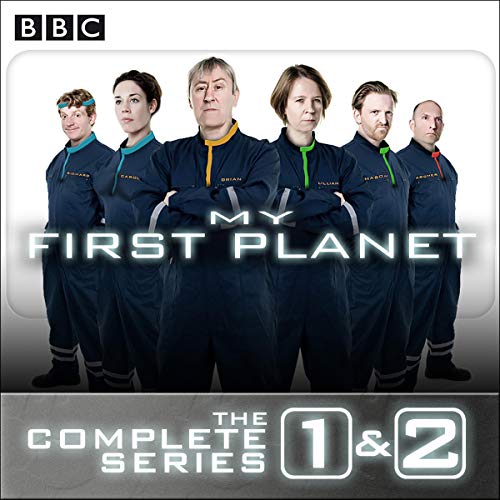 The complete series 1 and 2 of My First Planet - a sitcom set on a shiny new planet, starring Nicholas Lyndhurst, Vicki Pepperdine (Jo Brand's Getting On) and Tom Goodman-Hill (Another Case of Milton Jones).

The story so far: unfortunately, Burrows, the leader of the colony, has died on the voyage, so his number two, Brian (Nicholas Lyndhurst), is now in charge. He's a nice enough chap but no alpha male, and his desire to sort things out with a nice friendly meeting infuriates the colony's chief physician, Lillian (Vicki Pepperdine), who'd really rather everyone was walking round in tight colour-coded tunics and saluting each other. She's also in charge of Project Adam, the plan to conceive and give birth to the first colony-born baby.

Unfortunately, the two people hand-picked for this purpose - Carol and Richard - were rather fibbing about being a couple, just to get on the trip. Add in an entirely unscrupulous chief scientist, Mason, and also Archer, an idiot maintenance man who believes he's an 'empath' rather than a plumber, and you’re all set to answer the question: if humankind were to colonise space, is it destined to succumb to self-interest, prejudice and infighting? (By the way, the answer’s 'yes'. Sorry.)