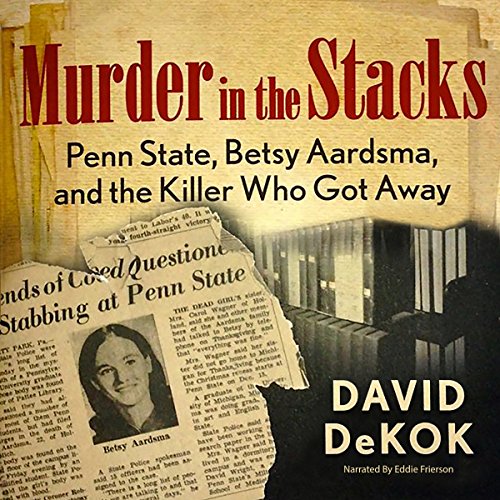 Murder in the Stacks

On the day after Thanksgiving in 1969, Betsy Aardsma, a 22-year-old graduate student in English at Penn State University, was stabbed to death in the stacks of Pattee Library at the university's main campus in the small town of State College. For more than 40 years, her murder went unsolved. Aardsma was smart, pretty and kind, and the Pennsylvania State Police could not figure out why anyone would want to kill her.

This book reveals the story behind what has been a scary mystery for generations of Penn State students, naming the likely killer and explaining why the police failed to bring Richard Haefner, also a Penn State graduate student, to justice. Much of the blame goes to Penn State itself, and especially to the killer's thesis adviser. The suspected killer, who died in 2002, was a pedophile who sought out women as cover for what he was. Although there is no known link between Haefner and Jerry Sandusky, the notorious former assistant football coach at Penn State, the listener will learn that more than one pedophile found a safe haven at the school during the same years. More than a simple true crime story, the book weaves together the events, culture, and attitudes of the late 1960s, memorializing Betsy Aardsma and her time and place in history.