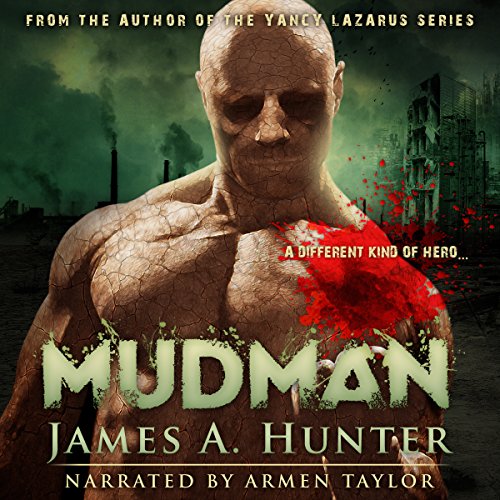 "Levi Adams isn't good in social settings, but he's great at killing things. A dark tale of vengeance and redemption (with a healthy dose of ass kicking), James Hunter's MudMan is a knockdown beat-'em-up that doesn't pull any punches." (Domino Finn, author of the Black Magic Outlaw series)

Levi Adams is a soft-spoken middle-aged Mennonite man - at least he tries to be when he's not murdering people.

Levi's a golem, a mudman, crafted from the muck, mire, and corpses of a World War II concentration camp. Killing is just a part of his DNA. He doesn't like it, but unfortunately he's been saddled with a divine commission to dole out judgment on those who shed innocent blood. After 70 years as a cold-blooded murder machine, however, Levi's trying to change his grisly nature. And the AA meetings and church services are helping. A little. But when he runs across a wounded girl, Sally Ryder, during one of his hunting expeditions, he realizes self-help may have to go on the back burner.

Someone is attempting to revive a pre-Babylonian murder god, and the road to rebirth is paved with dead bodies. Lots and lots of them. Now Levi must protect Ryder - the key to an unspeakable resurrection - and defeat a Nazi mage from Levi's murky past. But the shadowy mage holds a terrible secret about the mudman's unorthodox birth, one offering insight into Levi's morbid compulsion for bloodshed. It's a secret Levi would pay anything to uncover - maybe even Ryder's life. If Levi isn't careful, he may end up turning into the monster he always imagined himself to be.