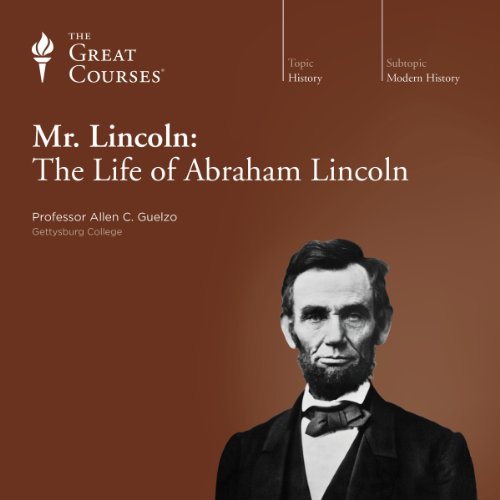 Five days after Abraham Lincoln was buried in Springfield, Illinois, John Locke Scripps, who had convinced Lincoln to write his first campaign autobiography, asserted that the 16th president had become, "the Great American Man - the grand central figure in American (perhaps the World's) History."

Historians still find it hard to quibble with Scripps's opinion. Lincoln was the central figure in the nation's greatest crisis, the Civil War. His achievements in office make as good a case as any that he was the greatest president in U.S. history.

What made Lincoln great? What was it about him that struck those who knew him? This fast-moving series of 12 lectures explores those questions with the help of one of our most distinguished Lincoln scholars and award-winning author.

The lectures take you through Lincoln's life, from his forebears' arrival in America to an evaluation of his legacy. And you'll come to know the man through the eyes of those who knew, lived with, and worked with him.

In presenting Lincoln, Professor Guelzo explores three themes: What ideas were at the core of his understanding of American politics? Why did he oppose slavery, and what propelled him, in the 1850s, into the open opposition to slavery that led to his election to the presidency in 1860? What gifts equipped Lincoln to lead the nation through the "fiery trial" of the Civil War? The result is an understanding of Lincoln as a man who envisioned a nation of self-governing equals wise enough to be guided not just by self-interest or popular enthusiasm, but by an abiding sense of right and wrong. Ultimately, he gave that nation, in his words, "a new birth of freedom."