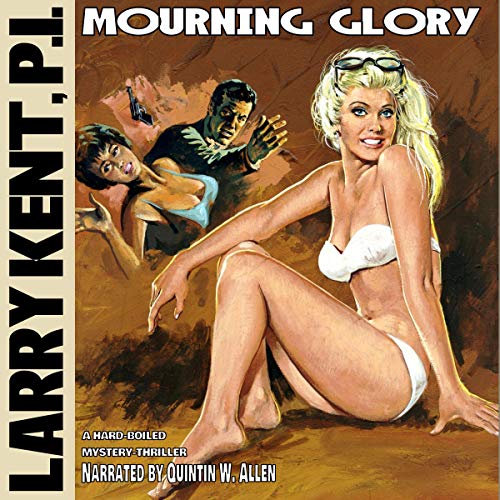 It started with the name "Emanuel Kadaver" and a New York address, both of which were written on one side of a 500 dollar bill. Intrigued, Larry Kent went along to discover just what his mysterious benefactor wanted. Next thing he knew, he was stranded 1500 miles from home with two whole days missing from his memory.

Who had dumped him on a lonely, humid island in the middle of the Louisiana swamplands?

Aside from Kadaver, there were only two other suspects: a tawny-haired swamp girl named Becky who longed to become a woman and the mysterious Miss Baines, whose gloomy, run-down mansion was patrolled by dogs who had been trained not just to defend, but to kill.

Only one thing was for sure - if Larry didn’t clear himself of the neatest frame-up he’d ever encountered, he had an appointment with the electric chair.

Larry Kent started his life as the hero of a half-hour radio show on Australia’s Macquarie Network, and was inspired chiefly by the success of the hard-boiled mysteries of Carter Brown. As the popularity of the radio show grew, the Cleveland Publishing Pty. Ltd decided to publish a series of Larry Kent novels.

Two authors, Don Haring (an American who lived in Australia) and Des R. Dunn (a Queenslander) are primarily associated with the series. Between 1954 and 1983, Larry appeared in well over 400 adventures.

Kent is a typical hard-boiled private eye. He smokes Camels, drinks whisky and within the first dozen pages or so, has usually met a dame and is fighting for his life. His mean streets are pure New York (although the radio series was set in Australia) and include Harlem nightclubs and Jersey roadhouses.

Generally, the body counts are high: about six deaths per novel. But there’s another side to Larry Kent. He’s a Vietnam war veteran who used to work for the CIA and still does, usually reluctantly, and on occasion.

And once, when an attempt was made on his life, the agency paid for him to have plastic surgery that altered his appearance...something he never quite managed to get used to.

Larry Kent is fast and fun, and Piccadilly Publishing is proud to be bringing his cases to a whole new generation of fans.