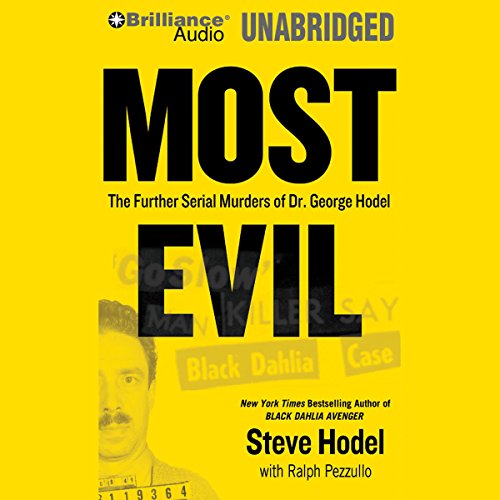 When veteran LAPD homicide detective Steve Hodel discovered that his own late father, Dr. George Hill Hodel, was the killer in the infamous Black Dahlia murder case, he wrote the best seller Black Dahlia Avenger, a book that convinced even the L.A. County Deputy District Attorney that George Hodel was responsible for Elizabeth Short's gruesome death.

As a veteran police investigator, Steve Hodel's instincts told him that if his father was capable of that level of cruelty, it probably didn't begin or end with the Black Dahlia. Steve Hodel has devoted his life to examining the evidence of his father's fascinating and mysterious life, and shocking new revelations that have come to light in the last five years are the subject of Most Evil.

If Steve Hodel's research is correct, Dr. George Hill Hodel was among the most prolific serial killers in history, beginning as a young man and continuing to kill throughout his long life of 91 years. Among his crimes are dozens of unsolved murder cases stretching back 60 years.

Most Evil compiles an astonishing amount of never-before-seen visual, circumstantial, and forensic evidence to prove Hodel's case. This relentless, compelling, and persuasive investigation will revolutionize the way we think about some of the most intriguing, brutal, unsolved, and previously unconnected murders in American history - and it may change our understanding of serial killers altogether.