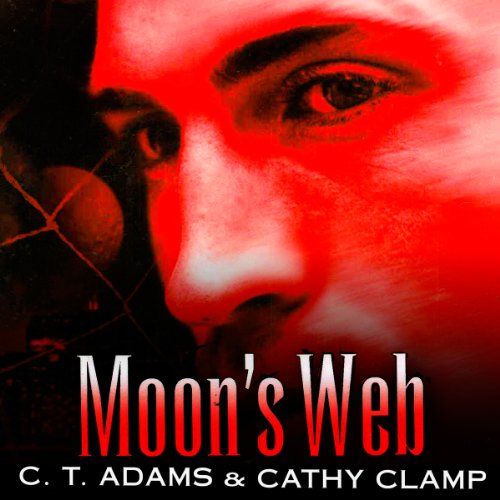 C. T. Adams and Kathy Clamp give us this sexy second installment of the Tales of Sazi. Hunky hit-man-turned-werewolf Tony is back for more. Now, he's getting psychic flashes, too. Adam Epstein embodies Tony's spirit, in particularly harnessing the wild, rough voice. Epstein keeps the pacing relaxed so listeners can enjoy every intense word. More importantly, he handles the red-hot sex scenes with the charm of James Dean. Getting tangled up in Moon's Web is a sizzling supernatural ride.

Tony Giodone made his living as an assassin - until one of his marks ripped his throat out and turned him into a werewolf. Now he's the best hired killer there is. When a curvy woman in an expensive suit tries to hire him to kill her, his wolf senses insist that she is his mate. One kidnapping, a plethora of gunfights, a psychic coma, and two faked deaths later, Tony and Sue have new identities and are hiding in a community of Sazi shapeshifters. All seems well, until Sue begins to pull away from Tony and he realizes that if he can't be more open with her, he's going to lose her.

To add to his problems, Tony is getting flashes of other peoples' lives. He doesn't know if they're memories or fantasies - but he wants it to stop, because he's learning things he shouldn't about his friends and neighbors. What's more dangerous than a psychic-powered werewolf assassin? Whatever it is, it's kidnapping and killing female Sazi...after it sucks out their powers. Its latest captive is the girlfriend of Carmine, the Mafia don who used to be Tony's boss. To get her back, Carmine will make war on all the Sazi - and while the Sazi would win, they can't afford to be exposed to humans. Now it's up to Tony to save Carmine's girlfriend - and all of the Sazi.