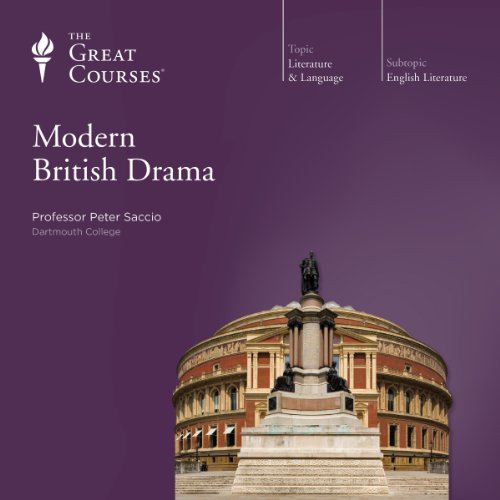 Waiting for Godot. The Importance of Being Earnest. Rosencrantz and Guildenstern Are Dead. Since Shakespeare's time, no period has produced more brilliant and various theatrical dramas in Great Britain than in the past 100 years.

Professor Saccio has selected the major British playwrights of the past century to cover Wilde, Shaw, Coward, Beckett, Osborne, Pinter, Stoppard, Churchill, and Hare. Why this roster of modern British playwrights? As you'll discover while exploring their great works in these eight lectures, some of them celebrate (or satirize) elite manners, some explore the changes in a kingdom that once ruled a quarter of the globe, some assault the sociopolitical establishment, and some probe the Existential anxiety of the modern age."Unlike other media, dramatic art occurs in a certain place in time; in the 'here and now,'" states Professor Saccio.

You'll examine the role theater has played in British culture and society over the past 100 years. You'll witness the evolution of the stylistic conventions of the British play, from the genteel drawing-room comedies of the late 19th century to the radical political theater of the late 20th century. Throughout this brief survey of some of the great innovators of the dramatic arts of the modern era, you'll understand how and why modern British drama has changed so dramatically, and you'll realize the importance of the political and social context in which these works were written.