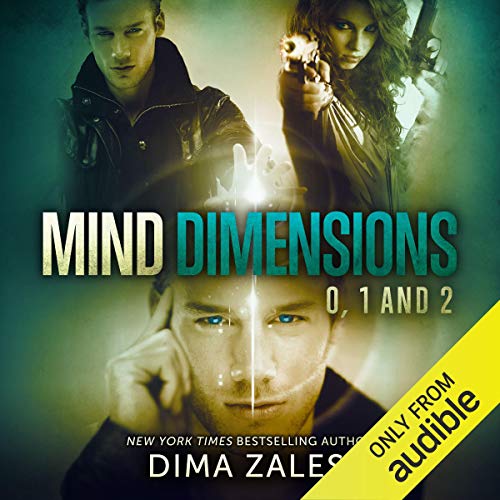 The first three books in the Mind Dimensions series from a New York Times and USA Today best-selling author.

The Thought Readers (Mind Dimensions, Book 1) Darren's had it easy his whole life. Finishing Harvard at 18 and landing a lucrative job on Wall Street at 21 - all things are possible when you can cheat by stepping outside of time. Thanks to his ability, he's a know-it-all, but what he doesn't know is how he's able to do what he does. That's until he meets Mira and discovers her dangerous, hidden world.

The Time Stopper (Mind Dimensions prequel) Mira can stop time, but she can't change anything. After her parents are murdered, she'll do anything to get revenge - even take on the Russian mob.

The Thought Pushers (Mind Dimensions, Book 2) Darren's life turned upside down when he met Mira. Now, as he races to uncover his own identity, he confronts new enemies - and realizes his unique powers might extend further than he ever imagined....

I am always compelled to compare authors and books and after I have read Cixin Liu, it is hard to satisfy me. The story line has a nice touch to it, but after a while the kick of the novelty wears off. The story starts missing depth and I wonder what book 1 in this series means to the series. The ending leaves an open trail which leads to book 3 but in total the series could simply END here. The story is good in a way, but not perfect due to missing depth, well it is a real subjective perception. Thus 4 Stars. Unluckily the reader destroys, whatever good the story has, by a readying rhythm that has nothing to do with the read content. The reader has a pleasant voice, but here it ends. The lady reader (I always do have problems with lady readers, I am not able to determine the reason) is easier to listen to, but sad to say , HER part of the story is short and does not lead to anything WITHIN the story line of the series. Two stars for bad reading on the readers behalf Four stars for the lady reader Thus 3 stars Lastly: I am not really satisfied.

I finished the first book and liked the storyline and the ideas behind it very much. Now book 2 started and I have to get a bit used to this one. In book one the main character, a man, gets himself in trouble and the story is told out of his perspective. Book 2 does the same, but now from the perspective of a female character that he met. She tells her bit of the story. Unusual but lets see where this leads to. The readers get only 4 stars. Book 1: the reader tells the story fine but his intonation is not to my liking. The text should be told in such a way, that there is a flow from the beginning to the end of a chapter. The sentences should by themselves end and at the same time connect to the next one. This reader does not do this, it feels more like start-stop reading, like nothing comes afterwards. Difficult to explain, it just sounded not quit right. The reader in book 2 uses her voice to transfer the anger from the main character and only succeeds up to a certain point. The "whispering" style of storytelling may work for others, it took me some time to accept/ignore. I recommend the book, the story is excellent. The readers are, for my taste, slightly off but hey, that's what taste is for.