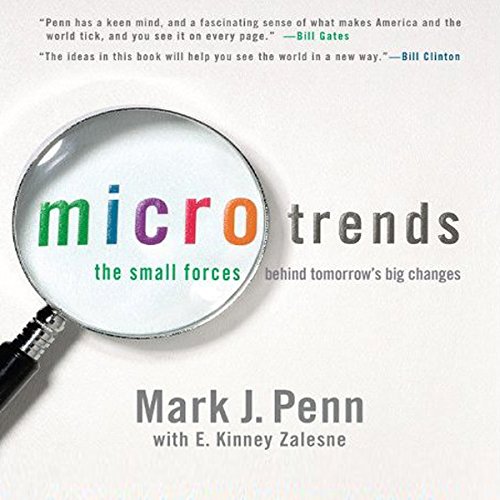 The adviser to Senator Hillary Clinton, Bill Gates, and President Bill Clinton proves that small is big by identifying 75 hidden-in-plain-sight trends that are moving America, revealing that the nation is no longer a melting pot but a collection of communities with many individual tastes and lifestyles.

In 2000, The Tipping Point entered the lexicon.

Now, in Microtrends, one of the most respected and sought-after analysts in the world articulates a new way of understanding how we live.

Mark Penn, the man who identified "Soccer Moms" as a crucial constituency in President Clinton's 1996 reelection campaign, is known for his ability to detect relatively small patterns of behavior in our culture - microtrends that are wielding great influence on business, politics, and our personal lives. Only one percent of the public, or three million people, is enough to launch a business or social movement.

Relying on some of the best data available, Penn identifies more than 70 microtrends in religion, leisure, politics, and family life that are changing the way we live. Among them:

You have to look at and interpret data to know what's going on, and that conventional wisdom is almost always wrong and outdated. The nation is no longer a melting pot. We are a collection of communities with many individual tastes and lifestyles. Those who recognize these emerging groups will prosper.

Penn shows listeners how to identify the microtrends that can transform a business enterprise, tip an election, spark a movement, or change your life. In today's world, small groups can have the biggest impact.

"The ideas in his book will help you see the world in a new way." (Bill Clinton)
"Mark Penn has a keen mind and a fascinating sense of what makes America tick, and you see it on every page of Microtrends." (Bill Gates)