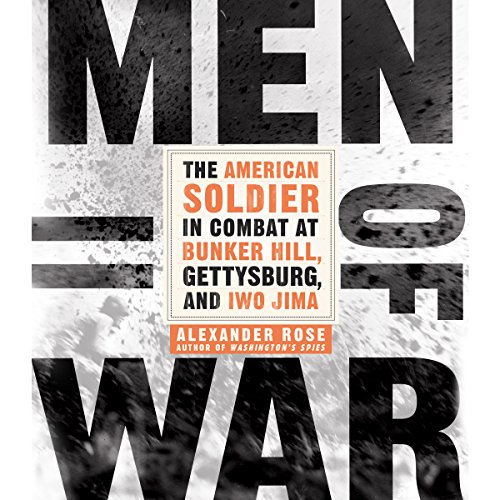 In the grand tradition of John Keegan's enduring classic The Face of Battle comes a searing, unforgettable chronicle of war through the eyes of the American soldiers who fought in three of our most iconic battles: Bunker Hill, Gettysburg, and Iwo Jima.

This is not a book about how great generals won their battles, nor is it a study in grand strategy. Men of War is instead a riveting, visceral, and astonishingly original look at ordinary soldiers under fire. Drawing on an immense range of firsthand sources from the battlefield, Alexander Rose begins by re-creating the lost and alien world of 18th-century warfare at Bunker Hill, the bloodiest clash of the War of Independence - and reveals why the American militiamen were so lethally effective against the oncoming waves of British troops. Then, focusing on Gettysburg, Rose describes a typical Civil War infantry action, vividly explaining what Union and Confederate soldiers experienced before, during, and after combat. Finally, he shows how in 1945 the marine corps hurled itself with the greatest possible violence at the island of Iwo Jima, where nearly a third of all marines killed in World War II would die.

As Rose demonstrates, the most important factor in any battle is the human one: At Bunker Hill, Gettysburg, and Iwo Jima, the American soldier, as much as any general, proved decisive. To an unprecedented degree, Men of War brings home the reality of combat and, just as important, its aftermath in the form of the psychological and medical effects on veterans. As such, the book makes a critical contribution to military history by narrowing the colossal gulf between the popular understanding of wars and the experiences of the soldiers who fight them.

"A worthy successor to The Face of Battle, telling the stories of three famous American battles that were fought in three very different technological eras.... This is indeed war up-close, as those who fought it lived it - and survived it if they could. Men of War is deeply researched, beautifully written. It is military history at its best." ( The Wall Street Journal)
“A highly recommended addition to the literature of military history.... Rose builds up a detailed picture of each of these battles, sparing few gritty details and romanticizing almost nothing. He writes vividly and memorably, with a good eye for the telling detail or anecdote as well as big-picture perspectives.” ( Kirkus Reviews)
“Rose’s grim, unadorned, yet immensely readable look at battle is a dose of what real war is like, and a good balance to the more common sanitized military history fare.” ( Publishers Weekly)