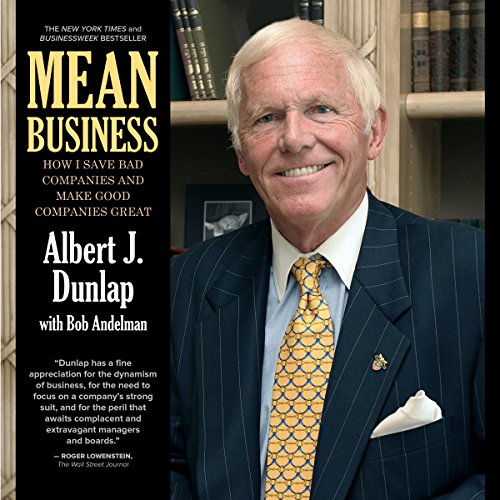 Al Dunlap is an original: an outspoken, irascible executive with an incredible track record of injecting new life into tired companies. The business media have coined a new verb"to dunlap"when describing a fast company turnaround. In April 1994 he became CEO and chairman of Scott Paper, which had lost $277 million in 1993, was on credit watch for excessive debt, and whose stock had been comatose for seven years. In a mere 19 months, Scott had record earnings, the stock had increased in value by $6.5 billion (over 200 percent), and Dunlap merged Scott with KimberlyClark in a stock swap that valued Scott at $9 billion and created the second largest consumer-products company in the United States.

Mean Business combines Dunlap's colorful personal history - his working-class background, employment, friendship with such people as Sir James Goldsmith and Kerry Packer, his views on why too many executives think of themselves as corporate royalty - and his provocative ideas on management and leadership. His specific, tested program on how to evaluate and choose a management team, get the lowest costs from suppliers, improve the balance sheet, and develop a real strategy make this an invaluable book.

The controversy about corporate performance and how to achieve it is near the boiling point, as executives face the hard fact of business life: What is good or even excellent today won't be satisfactory tomorrow. Mean Business is absolutely essential for both companies in trouble as well as those at the top of their game.

“Al Dunlap is what Frank Sinatra would have been if God had stolen back half an octave: Up from the streets of Hoboken, N.J., toughminded, proud of the hate he attracts, convinced it's a tribute to his audacity. Hate him or love himand there is considerable reason for bothhe personifies the particularly American conviction that individuals, not collective systems, solve problems. If you want a book that shows you all the colorful contradictions of late 20th century capitalism, you've come to the right place.” – Bob Baker, Los Angeles Times