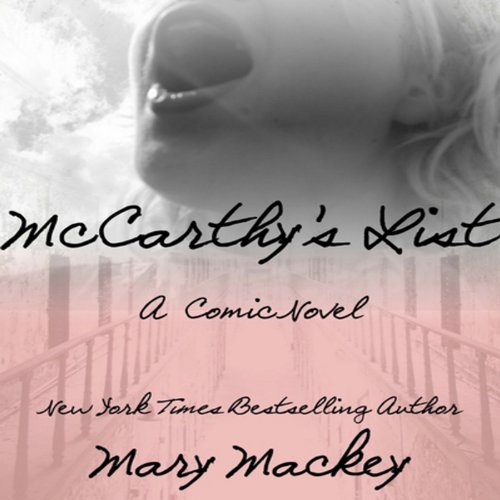 Mary Mackey's classic comedic work, McCarthy's List, opens with a striking and unexpected diatribe about breakfast, of all things, from its titular protagonist, Rinda Sue McCarthy, who listeners quickly realize is awaiting execution in a Mexican jail cell.

This all-star ensemble cast, especially featuring skilled voice actor Caroline Shaffer, puts in a lively group performance of Mackey's sometimes disturbing, always hilarious invective about 1950's American culture. Shaffer and co. are especially good at capturing protagonist Rinda Sue's manic energy, as she contemplates her questionable diagnosis of paranoid schizophrenia and thinks back on the people who defined her life...for good and for bad.

Written in the “first person insane,” McCarthy’s List is zany, hilarious, irreverent contemplation of the madness of American culture.

Rinda Sue McCarthy, born at the precise moment the atomic bomb burst over Hiroshima, sits in a Mexican jail awaiting execution by firing squad. As the Mexican soldiers practice their marksmanship outside her cell, she writes her confession: a tale of the crimes committed against her by the leaders of a Conspiracy She Is Not At Liberty To Name, and her murderous, but utterly apt revenge. Who are They? Old boyfriends, professors, doctors, her former husband - all of whom have sexually abused her, intellectually trivialized her, performed unnecessary operations on her, and committed her to a mental hospital against her will, not to mention condemned her to death.

Is Rinda Sue a paranoid schizophrenic driven mad by growing up in Indianapolis in an era when Joe McCarthy (no relation) was frightening America with his vision of a great, secret communist conspiracy? Or is her behavior the only sane response to an insane world?