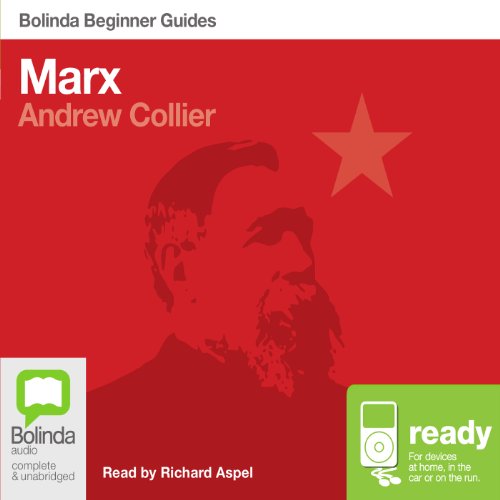 Aimed at those with little or no knowledge of the work and thought of Karl Marx, this audiobook is an illuminating and in-depth exploration of this important historical figure. Arguing for the relevance of his political and social ideas in today's global world, Andrew Collier give listeners a basic history, social commentary, and literary theory on Marx. This book is recommended to those who've always wished to expand their cursory understanding of Das Kapital. However, narrator Richard Aspel's delightful English accent and cozy, grumbling cadences may convince listeners who don't have a prior interest in political theory to give it a try.

Although one of the most influential thinkers of the last millennium, Karl Marx was relatively unheralded during most of his lifetime. Famous for predicting the inevitable demise of capitalism, it was only after his death that his clarion call reached a wide audience: "Workers of the world unite - you have nothing to lose but your chains."

Andrew Collier breathes new life into the achievements of Karl Marx, arguing that his work is still of vital relevance in today’s global climate of inequality. Covering all the elements of Marxist thought from his early writings to his masterpiece, Das Kapital, Collier probes the apparent inconsistencies in Marx’s work and reclaims him as a philosopher and political theorist.