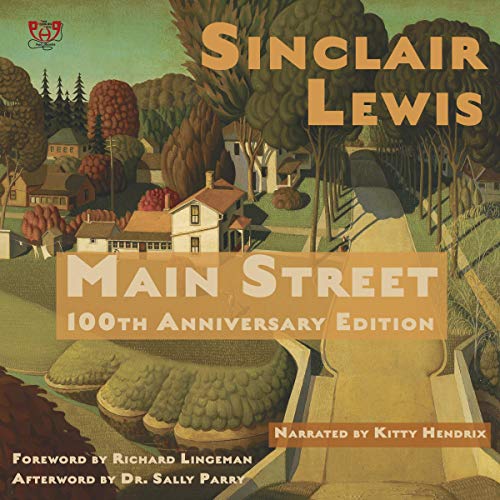 Published on October 23, 1920, Main Street was the first of Sinclair Lewis's great successes. According to biographer Mark Schorer, it "was the most sensational event in 20th-century American publishing history, from the point of view both of sales and of public response. The printers could not keep up with the orders, and for a while the publishers had to ration out copies to book-sellers."

A biting satire that countered the American myth of wholesome small-town life with a depiction of narrow-minded provincialism, it was to some degree based on Lewis's own experience of growing on Sauk Centre, Minnesota. Set in mid-1910s, it depicts the struggles of Carol Kennicott, a city girl, as she tries to adapt to small town life, having left her librarian job and St. Paul, Minnesota to marry Dr. Will Kennicott of Gopher Prairie. Dismayed by the town’s drabness and the conforming, petty inhabitants, Carol optimistically sets out to improve the town, only to find her ideas met with distrust and derision, and herself becoming a pariah.

Lewis was in the vanguard of a generation of American writers seeking realism to their work (Ernest Hemingway. F. Scott Fitzgerald, Willa Cather, Theodore Dreiser...). Lewis’s intimate knowledge of small-town America and subtle characterizations make Main Street a compelling classic still surprisingly relevant today: the religious bigotry, racism, puritanical righteousness, and duplicitous business practices Lewis exposes are with us still. His portrayal of women, especially Carol, is surprisingly sensitive, and his depiction of marriage and the compromises expected of woman offer both insightful social commentary and convincing realism.

The Pulitzer Committee recommended Lewis for the Pulitzer for Main Street in 1921, but the Trustees of Colombia University overruled the jury. In 1923, Lewis's "Babbitt" was chosen, but again the committee was overruled by the Trustees. He was finally awarded the Pulitzer in 1926 for "Arrowsmith", but he turned it down - becoming the first writer to do so. In 1930, he became the first American to be awarded the Nobel Prize for Literature. The committee, wrote: Main Street exemplifies Lewis’ “vigorous and graphic art of description and his ability to create, with wit and humour, new types of characters."