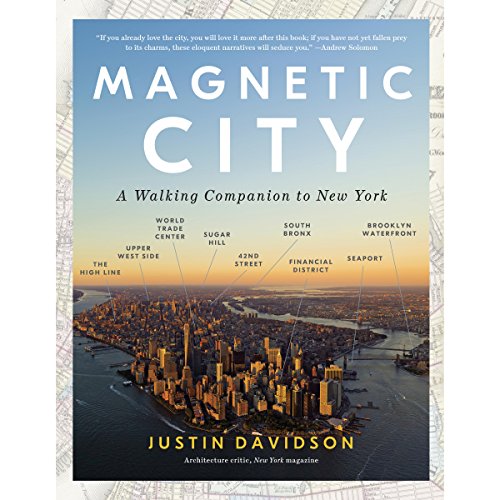 From New York magazine's architecture critic, a walking guide to New York City - a historical, cultural, architectural, and personal approach to seven neighborhoods throughout Manhattan, Brooklyn, and the Bronx, including six essays that help us understand the evolution of the city.

For nearly a decade, Pulitzer Prize - winning critic Justin Davidson has explained the ever-changing city of New York to his readers at New York magazine, introducing new buildings, interviewing architects, tracking the way the transforming urban landscape shapes who New Yorkers are. Now, his extensive, inspiring knowledge will be available to a wide audience. An insider's guide to the architecture and planning of New York that includes original insights from the men and women who built the city and lived in it - its designers, visionaries, artists, writers - Magnetic City offers first-time visitors and lifelong residents a new way to see New York.

Includes a bonus PDF of maps and walking tours throughout Manhattan, Brooklyn, and the Bronx

“An enthralling new book makes clear that I’m not alone in my home-town infatuation...lends nuance, texture and historical perspective to my impression that New York City has never been so appealing or life-affirming as it is today.” (New York Post)

“A street-level celebration of New York City in all ‘its perpetual complexity and contradiction’...a worthy companion to Alfred Kazin’s A Walker in the City and the American Institute of Architects guides to the architecture of New York as well as a treat for fans of the metropolis.” (Kirkus Reviews, starred review)

“Justin Davidson does more than direct our feet to New York’s hidden monuments. He explains the structure of the city with a clarity that would be bracing even for a Gotham habitué, but more than that, he finds the meaning in every building and byway.” (Andrew Solomon, National Book Award-winning author of Far from the Tree)

“Justin Davidson has a mind alive to every signal, and his brilliant prose style transmits that electricity in black-and-white type. He is thus born to the task of capturing the chaotic splendor of New York City on the page.” (Alex Ross, author of Listen to This)

"Davidson, the Pulitzer Prize-winning architecture critic for New York magazine, is a resident, student, and passionate lover of New York, and he has done right by a subject that, fittingly, has been essayed many times before. He combines a keen intelligence, experience, observational skills, expertise (especially but not solely architectural), and an elegant writing style to make this beautifully produced book indispensable." (Booklist)

"Justin Davidson's beautiful tours of New York City invoke and redouble our love of the metropolis. His observations of landmarks, in-between places, and layered histories, delivered by an amazing kindred-spirit of architecture, make us feel like royal presences in the city." (Jerry Saltz, senior art critic, New York)

"A fascinating and insightful companion for a walking tour of New York City. I particularly enjoyed the rich interweaving of the contemporary and the historical. A book worthy of the 21st century flaneur!" (Daniel Libeskind)