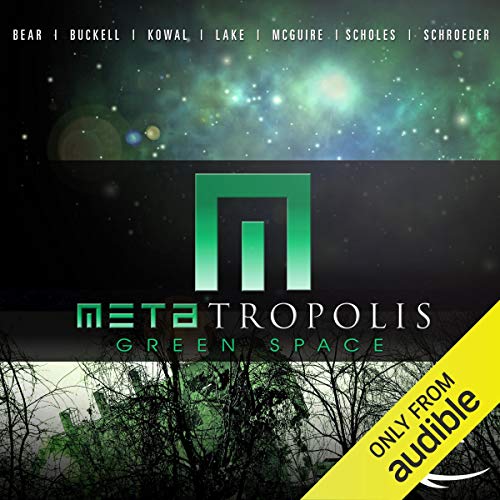 An all-star collection of audiobook award-winning performers give voice to the new world of human social evolution created by a collective of acclaimed science fiction writers in this second sequel to the Hugo-nominated shared world audio anthology, Metratropolis: The Dawn of Uncivilization. Writers from the earlier works share their perspectives with authors new to the series as the tale continues, moving into the mysteries and revelations of a wired world, an "internet of things" post-Green Crash and the subsequent renaissance,where some seek to leave a pristine, undisturbed Earth for the better life they envision on the moon, a green Mars, and perhaps even stars.

As METAtropolis: Green Space moves into the 22nd Century, human social evolution is heading in new directions after the Green Crash and the subsequent Green Renaissance. Nearly everyone who cares to participate in the wired world has become part of the "Internet of things", a virtual environment mapped across all aspects of the natural experience. At the same time, the serious back-to-the-land types have embraced a full-on paleo lifestyle, including genetically engineering themselves and their offspring. At the same time, a back-to-space movement is seeking the moon, a green Mars, and even the stars, with the eventual goal of leaving a pristine and undisturbed Earth behind. METAtropolis: Green Space is the creation of Hugo and World Fantasy Award nominee Jay Lake; Hugo Award winning writers Seanan McGuire, Mary Robinette Kowal, and Elizabeth Bear; New York Times best-selling author Tobias S. Buckell; Aurora Award winner Karl Schroeder; and critically-acclaimed author Ken Scholes.