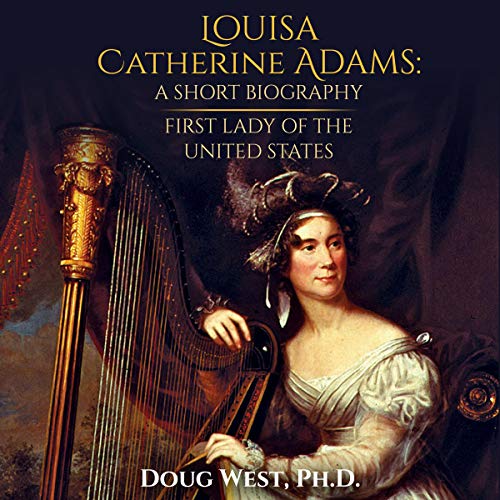 Louisa Catherine Adams, the wife of John Quincy Adams, the sixth president of the United States, was a talented and lovely lady by all accounts. She grew up in England and France and lived much of her life abroad with her diplomatic husband, in the major capital cities of London, Berlin, and St. Petersburg.

She was a gifted writer of prose and poetry, a translator of classic literature, and a discerning critic of the society and the political realm. Musically talented, she played on the harp and piano, while possessing the compassion to care for her family when a member was sick or despondent.

The politically astute Louisa was instrumental in propelling her husband to the office of the president. Her social grace and political savvy helped turn John Quincy from an awkward and, sometimes, rude politician into a serious contender for the nation’s highest office.

Her years in the White House were some of the most troubling for her. The demands placed on the couple drew them down and apart. The trove of letters, essays, and journals left by Louisa have cast a rich light on early American life, presidential politics, and her thoughts on the place of women in the early 19th century.

Clearly ahead of her time, she pushed to bring women out of the shadows of domestic life to confirm they had the potential to play great roles in society. The life of Louisa Catherine Adams is the story of a woman finding herself, her place in the world, and her voice, which still resonates today.

Louisa Catherine Adams: A Short Biography crisply reveals the life and times of wife of the sixth president of the United States.

About the author: Doug West is a retired engineer and an experienced nonfiction writer with several books to his credit. His writing interests are general, with special expertise in history, science, biographies, and how-to topics. Doug has a PhD in general engineering from Oklahoma State University.