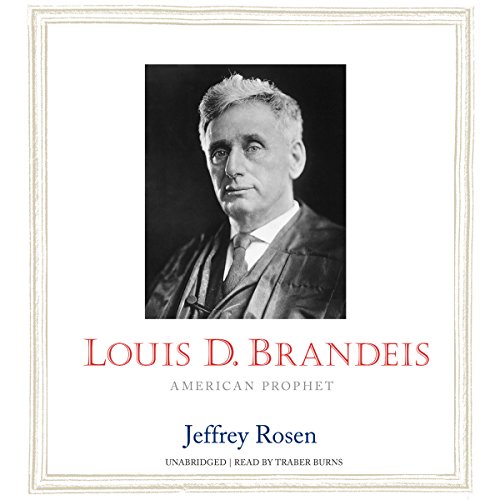 A riveting new examination of the leading progressive Supreme Court justice of his era.

According to Jeffrey Rosen, Louis D. Brandeis was "the Jewish Jefferson", the greatest critic of what he called "the curse of bigness" in business and government since the author of the Declaration of Independence. Published to commemorate the 100th anniversary of his Supreme Court confirmation on June 1, 1916, Louis D. Brandeis: American Prophet argues that Brandeis was the most farseeing constitutional philosopher of the 20th century. In addition to writing the most famous article on the right to privacy, he also wrote the most important Supreme Court opinions about free speech, freedom from government surveillance, and freedom of thought and opinion. And as the leader of the American Zionist movement, he convinced Woodrow Wilson and the British government to recognize a Jewish homeland in Palestine.

Combining narrative biography with a passionate argument for why Brandeis matters today, Rosen explores what Brandeis, the Jeffersonian prophet, can teach us about historic and contemporary questions involving the Constitution, monopoly, corporate and federal power, technology, privacy, free speech, and Zionism.