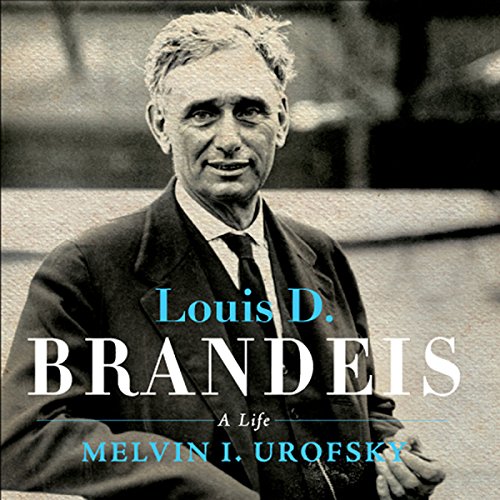 The first full-scale biography in 25 years of one of the most important and distinguished justices to sit on the Supreme Court – an audiobook that reveals Louis D. Brandeis the reformer, lawyer, and jurist, and Brandeis the man, in all of his complexity, passion, and wit.

As a lawyer in the late 19th and early 20th centuries, Brandeis pioneered how modern law is practiced. The author of the right to privacy, he led the way in creating the role of the lawyer as counselor and pioneered the idea of pro bono publico work by attorneys. Named to the Supreme Court, Brandeis, ranked as one of the nation’s leading progressive reformers. He invented savings-bank life insurance in Massachusetts and was a driving force in the development of the Federal Reserve Act, the Clayton Antitrust Act, and the law establishing the Federal Trade Commission.

As an economist and moralist, Brandeis warned in 1914 that banking and stock brokering must be separate, and 20 years later, during the New Deal, his recommendation was finally enacted into law - only to be undone by Ronald Reagan, which led to the savings-and-loan crisis in the 1980s and the world financial collapse of 2008.

At age 58 Brandeis became the head of the American Zionist movement. During the next seven years, Brandeis transformed it from a marginal activity into a powerful force in American Jewish affairs.

This is a huge and galvanizing biography, a revelation of one man’s effect on American society and jurisprudence, and an electrifying story of his time.
©2009 Melvin Urofsky (P)2010 Gildan Media Corp
Biografien & Erinnerungen Akademiker & Spezialisten Nord-, Mittel- & Südamerika Recht
Mehr anzeigen Weniger anzeigen