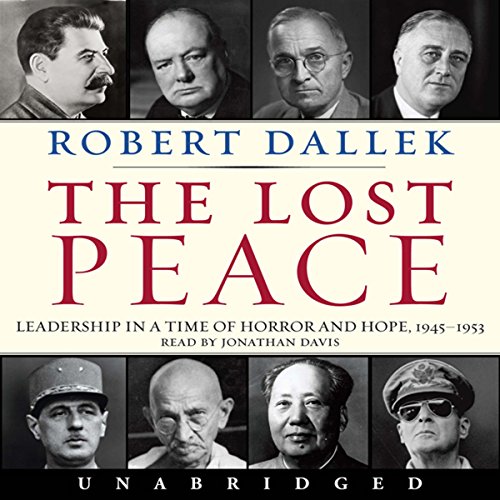 In a striking reinterpretation of the postwar years, Robert Dallek examines what drove the leaders of the most powerful and populous nations around the globe - Roosevelt, Churchill, Stalin, Mao, de Gaulle, and Truman - to rely on traditional power politics despite the catastrophic violence their nations had endured. The decisions of these men, for better and often for worse, had profound consequences for decades to come, influencing relations and conflicts with China, Korea, in the Middle East, and around the globe.

The Lost Peace is a penetrating look at the misjudgments that caused enormous strife and suffering during this critical period, from the closing months of World War II through the early years of the Cold War. From Hitler's killing program to Stalin's paranoia to Truman's decision to build hydrogen bombs, the men who led the world at this time executed astonishingly unwise actions that propelled the nuclear arms race and extended the Cold War. Dallek has written a cautionary tale that considers what might have been done differently to avoid the difficulties that strong and weak nations around the globe encountered in the mid-twentieth century.

Provocative, illuminating, and based on a lifetime of research, The Lost Peace also offers extraordinary lessons for today's leaders who may learn from the mistakes that were made between 1945 and 1953 and help them achieve an era of greater international cooperation.