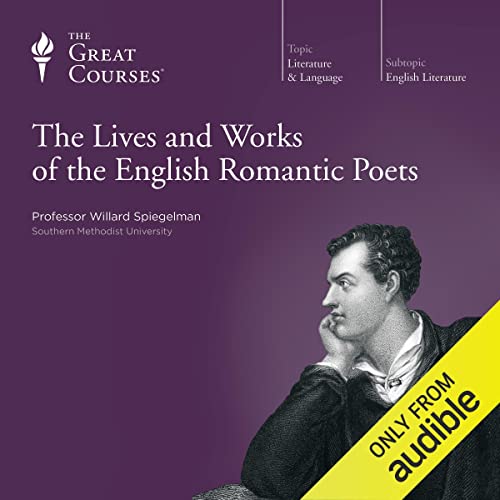 Lives and Works of the English Romantic Poets

The verse of the English Romantic poets is as daunting in its scope and complexity as it is dazzling in its technique and beautiful in its language. Now, in a series of 24 incisive lectures by an honored and distinguished teacher, scholar, and author, you can grasp how England's finest Romantic voices created their masterpieces, as Professor Spiegelman illuminates poems by Byron, Blake, Wordsworth, Coleridge, Shelley, and Keats, as well as by female Romantic poets like Felicia Dorothea Hemans and Charlotte Turner Smith, who were, in their time, as admired as their male counterparts.

You'll learn how the generalizations so often applied to the Romantic poets - who never even identified themselves as "Romantic" - were misleading as a group description, but that there were some common concerns among them: they wrote about Man's relationship to nature, which, with the universe, they considered active, dynamic entities. There is, though, a counter-desire to escape from nature and to deny Man's connection to it. There is a concern with society and politics, and an idealistic notion that humanity can transcend its enslaving traditions. The Romantics were conscious of consciousness itself - of the power of the mind as a force for self-glorification and a seed of self-destruction.

Professor Spiegelman's emphasis on analyzing the poems is on technique - on how a poem accomplishes its objectives - and to this end he meticulously dissects them, directing you to points of interest that deserve close observation.

And though the lectures focus on the poems themselves, they also tell the story of these great poetic souls and their impact on their age.