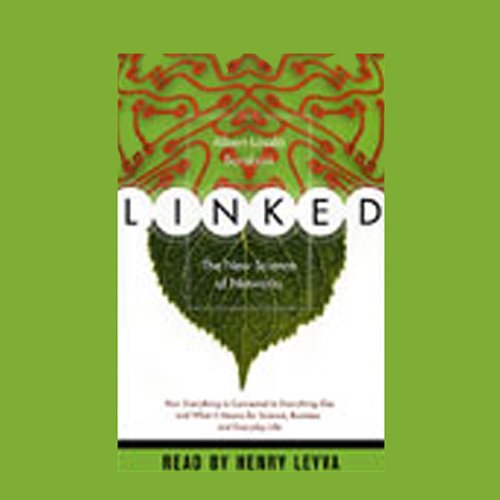 From a cocktail party to a terrorist cell, from an ancient bacteria to an international conglomerate - all are networks, and all are part of a surprising scientific revolution. A maverick group of scientists is discovering that all networks have a deep underlying order and operate according to simple but powerful rules. This knowledge promises to shed light on the spread of fads and viruses, the robustness of ecosystems, the vulnerability of economies - even the future of democracy.

Now, for the first time, a scientist whose own work has transformed the study of "links and nodes" takes us inside the unfolding network revolution. Albert-Laszlo Barabasi traces the fascinating history of connected systems, beginning with mathematician Leonhard Euler's first forays into graph theory in the late 1700s and culminating in biologists' development of cancer drugs based on a new understanding of cellular networks.

Combining narrative flare with sparkling insights, Barabasi introduces us to the myriad modern-day "cartographers" mapping networks in a range of scientific disciplines. Aided by powerful computers, they are proving that social networks, corporations, and cells are more similar than they are different. Their discoveries provide an important new perspective on the interconnected world around us.

Linked reveals how Google came to be the Internet's most popular search engine, how Vernon Jordan's social network affects the entire American economy, what it would take to bring down a terrorist organization like al Qaeda, and why an obscure finding of Einstein's could change the way we look at the networks in our own lives. Understanding the structure and behavior of networks will forever alter our world, allowing us to design the "perfect" business or stop a disease outbreak before it goes global.

Engaging and authoritative, Linked provides an exciting preview of the next century in science.

Extremely interesting book about how many things -when not everything - in the world can be seen as a network. Examples include how people meet and talk at parties, how human or cancer cells work, how viruses or information spreads or does not spread, how google can be seen as a hub in the network etc.Some internet related info seems outdated however, in all other aspects this is very thought inspiring book. It kept my interest from the beginning to the end. Three weeks after having listend to it I often think about how the network theory can be applied in more and more ordinary every day things.